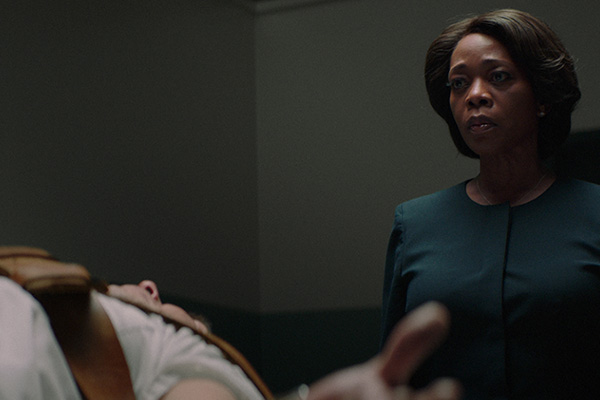 While most prison films focus on volatile criminals in violent situations, this complex narrative takes a different, welcome alternative, though one no less unnerving. This quiet, tense examination is anchored in warden Bernadine Williams who supervises one execution as the film begins and prepares for her twelfth, interacting with victims’ and prisoners’ families, the inmate’s lawyer, the chaplain, and the support staff who participate in a death row execution.

These subplots expand the deliberation that also includes protestors outside the prison gates and a few television news reports. As significant, Bernadine’s relationship with her supportive husband Jonathan also suffers from her understandably necessary detachment. In other words, the cumulative effect of the traumatic execution experiences harm our entire social fabric. Having worked on several clemency cases herself, Chukwu knows  this environment, details the three drugs used and shows their occasional failings, along with the symptoms of PTSD.

The prisoner at the center of the drama, Anthony Woods, lives a harrowing roller coaster of emotions as his lawyer Marty Lumetta pursues appeals and pardons. Minimal dialogue with long, quiet scenes provide time for reflection. Crucial to communicating the stakes for everyone is Alfre Woodard as Warden Bernadine. Her extraordinary performance proves that silence, for a master actor, can hit harder than reams of dialogue. Aldis Hodge as Woods, Richard Schiff as lawyer Marty, and Wendell Pierce as Jonathan all give strong support.

This is a film of advocacy that makes its case intelligently and poignantly. For “Clemency,” writer/director Chinonye Chukwu became the first African-American woman to win the Dramatic Grand Jury Prize at the 2019 Sundance Film Festival, screening at Landmark’s Plaza Frontenac Cinema.