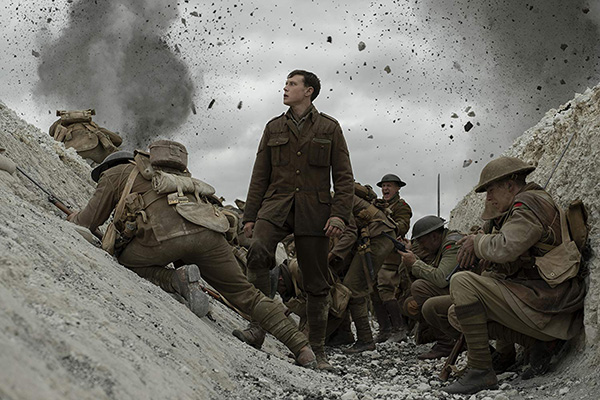 In 1917, the doughboys fighting the Great War still thought they'd be home by Christmas. The film "1917" tells the story of two of those soldiers, Lieutenants Blake and Scofield. They are assigned an impossible task, one that makes the goal of "Saving Private Ryan" seem like tiddlywinks.

The young lieutenants are sent with a message to the front to warn the band of brothers that they are marching into a trap. If the two battalions of soldiers are not stopped, they will die -- all 1,600 including Blake's brother. Scofield  (George McKay) wants to wait till dawn. "Right, it's not your brother," says Blake (played by Richard Madden from "Cinderella" and "Game of Thrones")."

They have been told that the Bosch, the Germans, have quit their front line, so the boys proceed forward. In zig-zagged trenches, they dodge dozing men and gnawing rats on their lines and in enemy territory. "Even their rats are bigger than ours," Blake says, hanging on gallows' humor. They shoulder through dead horses. They slog through mud, through dug-outs, into no-man's-land.

The two young actors portray the callow youth, typical of the boys seen in Peter Jackson's remarkable documentary, "They Shall Not Grow Old." Madden and McKay are supported by veterans like Colin Firth and Benedict Cumberbatch, and although the latter is given top billing, he appears but briefly to deliver the money line.

This story would be just one more war story if not for the way it's told. The brilliant director Sam Mendes worked for realism with cinematographer Roger Deakins behind the camera. The two also worked together on "Skyfall." Deakins' fluid camera movements make the film look as if it were shot in one take. The filmmakers had to map out the shots through obstacles and choose light and texture consonant with the times. Even small takes, like a general in firelight or a shot soldier's bloodless-white face, show Mendes' and Deakins' care in making this masterful film. In comparison with WWI novels, it's more Pat Barker than Anne Perry.

Mendes wrote the script with Krysty Wilson-Cairns, allowing for wordless action set to the percussion of guns. When a soldier sings the melancholy folksong, "Wayfaring Stranger," "1917," a realistic war movie, becomes a paean to peace, brought home in time for Christmas.