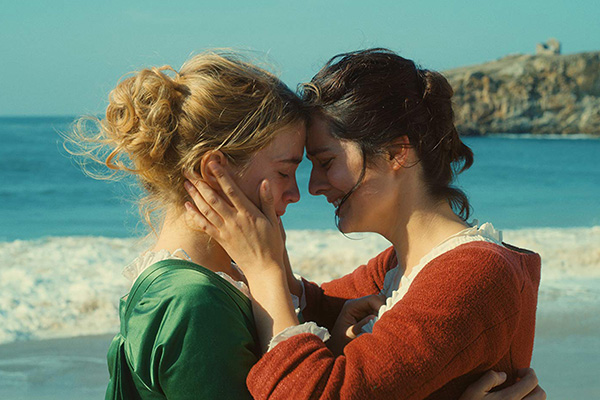 ‘Portrait Of A Lady On Fire’ Presents Exquisite Profiles

Writer/director Céline Sciamma's "Portrait of a Lady on Fire" is a haunting examination of love and the restrictions imposed on women by eighteenth-century French society. Artist Marianne is commissioned to paint a portrait of Héloïse, a work solicited by her potential husband in Milan for his approval and acceptance of Héloïse as his wife.

Marianne must fulfill this assignment without alerting Héloïse, recently brought home from the convent by her mother. As director Sciamma explained for the Telluride Film Festival screening, in 1770 "women painters were numerous and had careers, notably thanks to the fashion for portraits." Except for a brief introduction as Marianne, later in life, teaches an art class and a concluding scene, the slow but mesmerizing narrative remains squarely on Marianne intensely observing Héloïse on walks from the château, where the film was shot, to a Brittany island's cliffs and seashore.

Exquisite art direction--costumes, setting, lighting, compositions--creates a quietly hallucinatory experience, intensified by the absence of any added music not emanating from on-screen action. Sciamma "wanted to make music a part of the characters' lives, as a rare, desired, precious, unavailable thing." The film's choreographed rhythms come from "the movements of the bodies and the camera," and this concentrated emphasis pays high dividends because of Noémie Merlant's performance as Marianne, in every scene, and Adèle Haenel as Héloïse.

The servant Sophie figures prominently in a subplot, adding a biological problem. Artist Hélène Delmaire deserves acknowledgement for painting sixteen hours a day to contribute the paintings and hands we see on screen. One theme also merits considerable thought, and that is the Orpheus/Eurydice myth, desire and loss reconsidered in a unique, exciting way. Sciamma describes Marianne and Héloïse as curious, intelligent, and wanting to love. Her adoption of these women's cautious, scrupulous gaze is extraordinary and rewarding.

For its profound interrogation of love, "Portrait of a Lady on Fire" won the Best Screenplay award and the Queer Palm at last year's Cannes Film Festival, in French with English subtitles. Streaming on Hulu. Check listings.