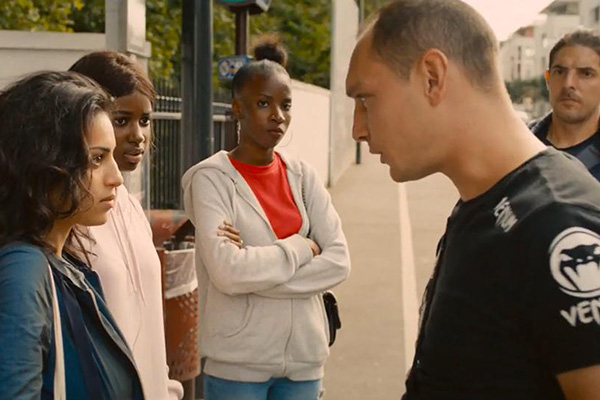 French cinema has a knack for gripping police procedurals. To that group must now be added writer/director Ladj Ly's "Les Misérables," a film with no connection to the musical by that name. Instead the title refers to embattled Parisian banlieue (district) Les Bosquets where the film is set and where Victor Hugo located important scenes in his famous 1862 novel "Les Misérables."

And miserable, indeed, are the residents and the police who patrol the area, introduced through newly assigned crime unit Brigadier Stéphane Ruiz. Through his own initiation hazing, Stéphane quickly learns about his partners, the experienced pair of Gwada and Chris. Streetwise and cynical, abusive and indifferent to discrimination on full display, they care only about keeping a precarious, delicate balance between the police and the combative, impoverished, housing project residents.

The community's various factions have negotiated their own hierarchical system: the so-called Mayor who collects protection money from the sundry market stall entrepreneurs, authoritative kebab cafe owner Salah who is the most even-tempered figurehead, and the unruly teenagers ready to erupt. The always endangered relationships will teeter and collapse into shocking violence with the theft of a lion cub from a Gypsy traveling circus, an injured boy, and drone footage of the police confrontation, not that this slippery, semi-truce didn't threaten complete, brutal destruction at any moment by those on either side of the divide. This tense, vibrant, inequitable environment is powerfully depicted by co-writer/director Ly who grew up in the area and has compellingly captured it in his debut feature film.

Reportedly inspired by the 2005 Paris suburb riots, the throngs in the opening scene celebrate France's 4 -- 2 World Cup victory over Croatia. This energy and release will transition to a threatening mob. It doesn't take a huge leap of imagination to find parallels to events here or worldwide. "Les Misérables" won the Jury Award at last year's Cannes Film Festival and was France's submission for the 2019 Best Foreign Film Oscar. In French with English subtitles. Streaming on Amazon Prime beginning April 10 and also available on other video services. Check listings.