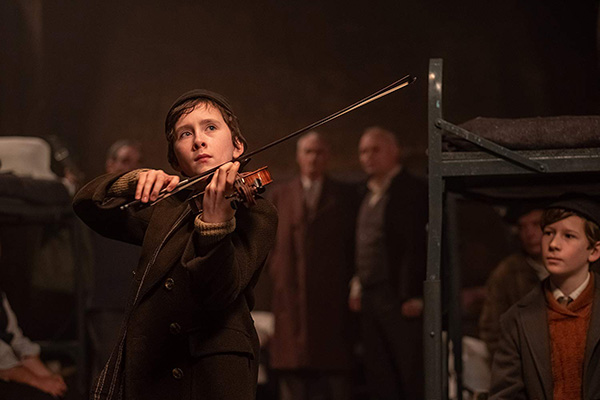 The Song of Names

Pain lies in the switchbacks in time in "The Song of Names." The title, which remains opaque until the middle of the story, refers to the dead, chanted for ease of memorizing. This litany names the dead at Treblinka, an extermination camp in Poland during the Holocaust.

To get to that camp, those names, and that song, the story flashes back to Dovidl, a young Polish genius, boarding with a family in England. The English father promises the Polish father to maintain the boy's Jewish traditions. Dovidl plays the violin, and his new roommate, Martin, the piano. They vie for supremacy in the household as they bond.

The '30s dissolves into the '50s. Dovidl is to play in his first concert. He never shows. The '50s dissolve into the '80s. Martin looks all over the world for his best, lost friend. Until the end, the two are still in concert.

Three actors play Dov and Martin through three decades. The roles end with the admirable Tim Roth, quietly pursuant throughout, as Martin and Clive Owen from "American Crime Story" as the last Dov. Saul Rubinek plays the father and impresario, born to the roles. Eddie Izzard has a cameo as a radio announcer. As the rebbe, Daniel Muthu sings the Song of Names so beautifully as to bow heartstrings.

That scene grabs as does the last one. There were some precious other moments when the movie could have latched on more but did not, perhaps because of the timeflights. Jeffrey Caine wrote the screenplay for "The Constant Gardener"; here he built on Norman Lebrecht's novel. Caine's dialogues, especially between the two boys and between Martin and his witty wife, played by Catherine McCormack, are wordplay at their definitive best. François Girard, who also directed "The Red Violin" and "32 Short Films about Glenn Gould," keeps "The Song of Names" dark, from air raid shelters to beards and hats to concert halls and theme. Girard knows music, he knows grief, and he names names in "The Song of Names."