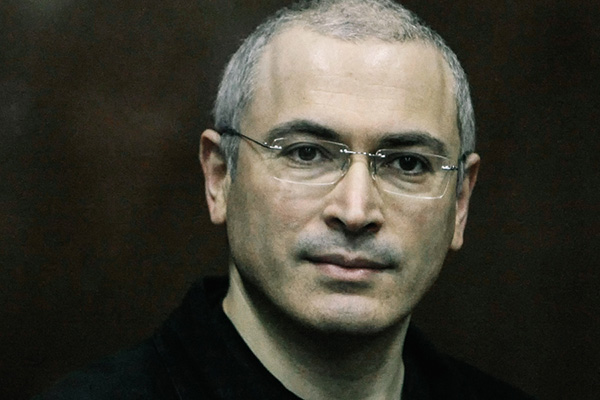 'Citizen K' Documents The Trials Of A Russian Dissident

The title, a nicked allusion to Orson Welles' "Citizen Kane," details the life of Mikhail Khodorkovsky, a Russian dissident now living in London. He was once a Russian oligarch, one of a band of millionaires. Ten years in a Siberian prison turned him against Vladimir Putin – but not against his homeland.

This upstanding documentary was made by Alex Gibney, and any devotée of the documentary form bows to Gibney's name, for he is the producer and director of such award-winners as "Enron" and "Going Clear." As the writer, director, producer, and narrator of "Citizen K," Gibney wields all those batons with the expertise that has given him renown.

Khodorkovsky's story demands attention. Gibney starts with his school days and follows him to the bank. He became Russia's wealthiest man. Khodorkovsky, a handsome charmer, defined "gangster capitalism." He amassed a fortune, first in banking and then, oil. In fact, the first scenes show fire ejaculating from an oil well against the Russian darkness to the sound of a Russian choir. On what were probably trumped-up charges of embezzlement, Khodorkovsky is imprisoned and tortured before finally being released in 2013 in the same public relations display that freed some of the women in Pussy Riot.

Khodorkovsky sought refuge in London; from there, he fights everything that Putin stands for. Because Khodorkovsky is 56, telling his story means Gibney's also tells recent Russian history. The sous text to Khodorkovsky's biography is Putin's, the man and the dictator. Concomitant is the understory explaining why Donald Trump admires Putin.

Alex Gibney's excellent documentary follows Mikhail Khodorkovsky, an oligarch who became a dissident, who learned, as he says, that "sometimes you can win when you're willing to lose everything." "Citizen K" also shadows two presidents dedicated to boundless authoritarianism. Therein lie its hefty lessons.