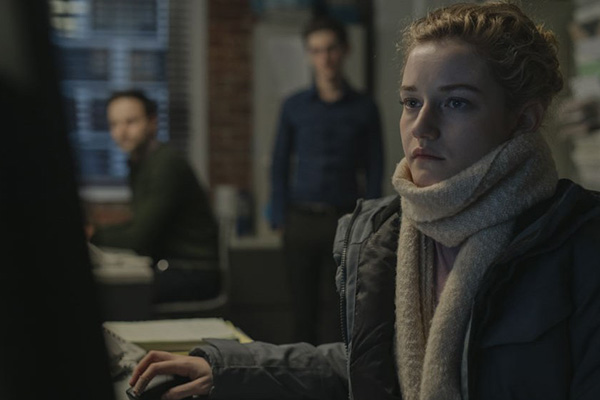 'The Assistant' Chills With "Me, Too' Reality

Gird your loins for "The Assistant." Be ready for a quiet film that chills you to the bones, kind of like 2018's "The Guilty" in its building force. Be ready for a film that explains so much about corporate harassment, about women's abuse, about silencing victims and whistle-blowers.

"The Assistant" begins symbolically in the dark. Jane, a slight young woman, opens a film production office. She's first in, last out of the office. She has recently graduated from Northwestern and has landed a dream job in the film industry. She wants to be a producer and is starting from the ground up.

Before she can pour her Froot Loops in the bowl in the galley, she turns on lights and tidies. She picks up an earring from the floor and dons blue vinyl gloves to scrub stains from the sofa in her boss' office.

The other employees show up but barely speak to her. In fact, to get her attention, one of the little men tosses paper balls at her. Jane arranges for a car service, she pulls paper plugs out of the office copier, she paperclips scripts. Her office mate forces her to take a call from the boss' wife, who screams at her.

It's only when Jane discovers that her boss has invited a young woman from Boise, Idaho, to also become an assistant does Jane balk. The scene with the head of HR, played by Matthew Macfadyen of "Pride and Prejudice," is terrifying. Jane is played by Julia Garner of "Ozark." On camera nearly the whole time, Garner adjusts her face, her voice, her body to the day's demands in an acting tour de force.

She has the words of writer Kitty Green to bolster that singular role of Jane, but she also has Green's directing to guide her efficiently with nothing wasted in any of the scenes under Michael Latham's cameras. They survey the scenes from above a desk, over a file cabinet, around a telephone, giving as much dimension as possible to a mostly closed set.

"The Assistant" addresses the sexual complexity of morals and ambition, praise and pimping. It should play on a double bill with "Bombshell," which is loud, flashy, and even gimmicky. Although exploring the same topic, "The Assistant" is subtle, dark, and horrifying -- and all too real. Kudoses to Kitty Green and Julia Garner.