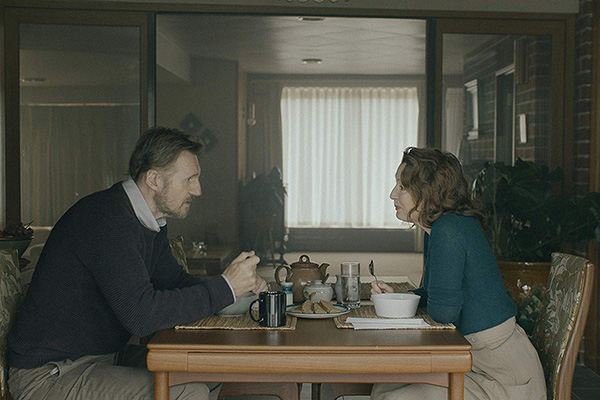 The film begins and ends on a walk. Tom and Joan, long married, urge each other one along the quai. They move together, her short legs taking two steps for every one of his long limbs'. They are at ease with each other from years of shared experiences and bantering affection.

When showering after exercise, Joan finds a lump in her left breast. She asks Tom to feel for it, too. He discounts it to ease her worry. So does the doctor, who says it's probably just a cyst. Joan endures tests, then a biopsy, and then the diagnosis. Just as she suspected: she has breast cancer.

And, thus, begins her year of treatment, from surgery to chemotherapy to more surgery for reconstruction; from acceptance to anger to advice.

This late-middle-aged couple has also endured the death of their daughter. One of the first things Joan asks of Tom is to go alone on their annual pilgrimage to cemetery on the girl's birthday, the first day of Joan's treatment.

Joan and Tom are not extraordinary. They argue, they make up, they tease, they split, they cleave unto one another. They make it.

The couple is played by the fine actors Liam Neeson and Lesley Manville, he of  "Taken" fame; she of "Phantom Thread." Unfortunately, there are few scenes for Neeson that do not bring up his personal tragedy as the widower of Natasha Richardson 10 years ago. You wonder, how ever could he play the role of this husband in danger of losing his wife?

Also, unfortunately, nothing in their acting lifts the film very high above average. Oh, Owen McCafferty's writing is not soapy, nor is the direction by Lisa Barros D'Sa and Glenn Leyburn embarrassing.

But the question remains: who's going to see "Ordinary Love"? Breast cancer survivors? Widowers? What would entice someone to see a film that's good and solid but not exemplary about a disease that's just horrid? "Ordinary Love" does not have that pull.