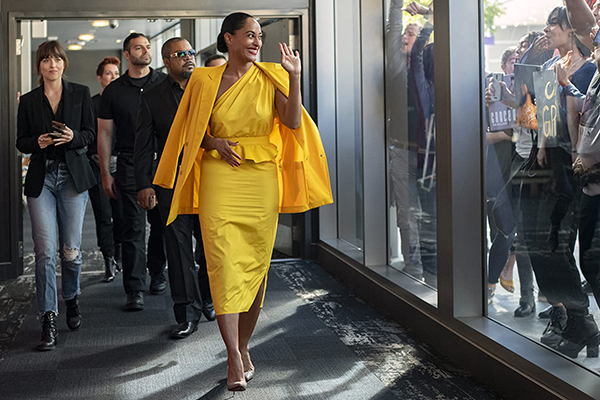 Say, during a pandemic. "The High Note" satisfies that need for something pretty well done though redundant. If it reminds you of "All About Eve" or "The Devil Wears Prada," that's okay because those are good movies for filling time between catastrophes.

"The High Note" is not about fashion or theater. It is about music, popular music. It is about a famous woman and her entourage, including her agent, her housekeeper, and her assistant.  And one other, but that's a little surprise -- not that you didn't guess it, but "The High Note" is the kind of movie to make you feel good about getting it.

Grace Davis has been around -- and she has the Grammys to prove her excellence. She has been singing so long that fans are quick to tell her that their mothers played those LPs when they were little -- just what every aging singer wants to hear. For three years, she has been assisted by Maggie, who knows music, who studies her boss, who wants to fledge her wings as a producer.

She finds a singer and starts to produce his work. And then the notes hit the staff.

One of the good things about "The High Note" is the cast. Tracee Ellis Ross, she of the Diana Dynasty, plays Grace as if born to the role, slink and slide and all. Dakota Johnson waffles through her role as Maggie, who has her own ups and downs. Kelvin Harrison Jr., from "Luce," struts his surprise singing very well, and Bill Pullman plays Maggie's dad. Putting in a cameo is Eddie Izzard, which makes the movie worth seeing all in itself, of course.

Without much in their portfolios, Nisha Ganatra directed and Flora Greeson wrote the script, and they did okay. They put Grace with Oprah in one scene declaring that "When there are no more surprises, then who am I doing this for?" Well, "The High Note" offers few surprises. It  demands little and gives just enough for these days shifting from hibernation to estivation. "The High Note" opens on demand on May 29.