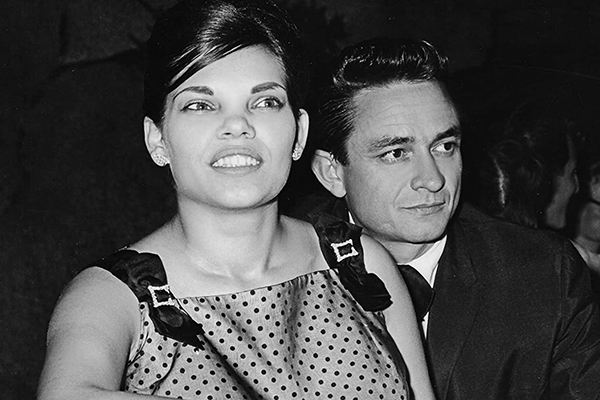 This documentary is not for everyone. In fact, it is mainly for four women, the daughters of Johnny Cash and Vivian Liberto Cash, his first wife and their mother. Just how much do you care about Vivian Cash? Do you think she was maligned in the film "Walk the Line"?

Do you long to hear her side of the story? Her daughters'? How you answer those questions will dictate what you think of "My Darling Vivian," certainly more therapy than entertainment.

Vivian Liberto, her jet black hair to her waist, met Johnny Cash when they were teenagers in 1951 in Texas at a roller rink. Once in the Army in Germany, he wrote her thousands of letters, often addressed to "my darling Vivian." They were married in 1954 when he was 22 and she, 20. Quickly, they had Rosanne, Kathy, Cindy, and Tara. As the Man in Black achieved more and more fame, he spent more time on the road and less time with them. He courted drugs and fame while his wife and children sat home in Tennessee.

The couple divorced in 1966. Vivian Cash, who remarried rather unhappily, became a dear grandmother and died in 2005. That was the year "Walk the Line" came out with Ginnifer Godwin playing Cash's part as a bitter woman. The film did not show Vivian in a good light, says Tara.

Director of the doc, Matt Riddlehoover, interviews all four daughters, and snazzy editing often has a different daughter relating her version of the same story -- just the way four sisters raised in a dysfunctional family would. "All four of us have different mothers," says Rosanne, the country singer.

A most troubling chapter in this largely depressing tale occurs when Italian Vivian Liberto, was photographed darkly as she picks up her husband from jail. Accused of being black, she scrounges up letters to support her whiteness.

Otherwise, the film is little more than a release and a relief for the four daughters. For die-hard Johnny Cash fans, the documentary adds to his vertical biography as well as the horizontal. But for the ordinary film goer, "My Darling Vivian" never transcends the appeal of a home movie, a defense of Mother.