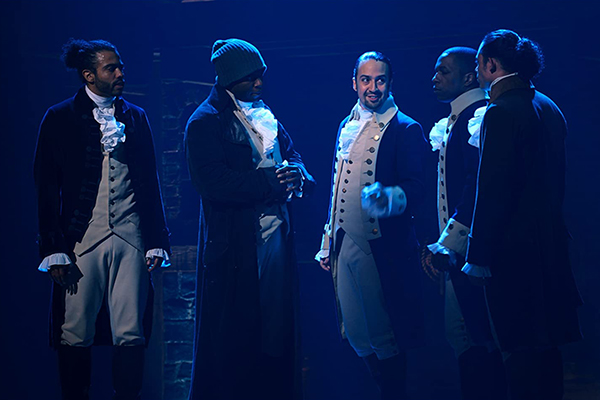 'Hamilton' Lights Up The Television

At the end, Eliza Hamilton stands with tears in her eyes. The television audience watching Phillipa Soo portray the wife, now the widow, of Alexander Hamilton in the Broadway musical, "Hamilton," can see those tears as very few people in a theater audience could see that sadness on stage.

The superfine televised version of Lin-Manuel Miranda's phenomenal production about the first Secretary of the Treasury provides close-ups and tracking shots and intimacy. Yes, the three dimensions of a theater are reduced to television's two-pretending-to-be-three. Lost is the spectacle, lost are flesh and flash. Lost is the breadth from stage left to right and the choice of what to look at.

What is gained makes the transition from stage to television worthwhile. For one thing, "Hamilton" on Disney+ presents the original cast: Miranda himself -- playwright, composer, and lyricist -- stars as Hamilton, every syllable considered. Listen as he says quietly, "I'm sorry. What?" when Washington announces his retirement. Daveed Diggs as Lafayette and Jefferson, Jonathan Groff as the comic-relieving King George, Chris Jackson as Washington, and Leslie Odom Jr. as A. Burr; on the distaff side, the remarkable Renée Elise Goldsberry as Angelica Schuyler, Soo as her sister Eliza, and Jasmine Cephas Jones as Maria Reynolds, Hamilton's mistress and way-layer.

Declan Quinn, director of photography, moves with the performers under the direction of Thomas Kail, who directed the stage play. They knew where to put the cameras, when to pull back for the full stage, when to close in for faces, when to widen to show David Korins' fine production design or Andy Blankenbuehler's choreographed dancers, who pirouette or prowl or pounce like a big cat.

The music -- rap and hip-hop and blues -- pounds the beat behind the stories of our founding fathers. John Bolton's having stolen the phrase "The Room Where It Happened" for his recent book shadows that song especially; "Who Tells Your Story" holds a different meaning as Confederate soldiers are slashed off their rearing horses now.

Concerning this televised version of "Hamilton," analyst Soraya McDonald asked in a recent essay, "What now?" If "Hamilton" turned a "revolution into a revelation" when it opened in 2015, she wrote, how is its take on history going to be viewed today, with revolution in the streets?