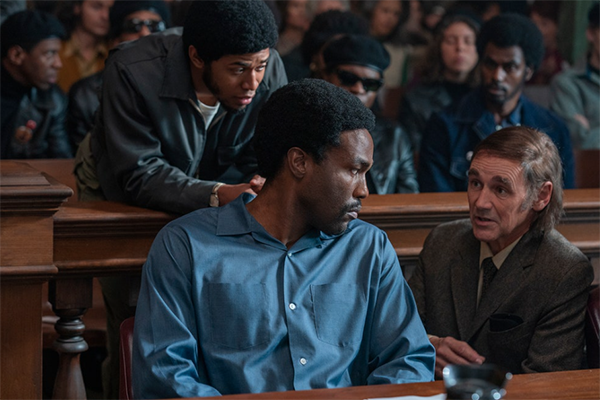 The Trial of the Chicago 7

Those who did not live through the Democratic National Convention in Chicago in 1968 or follow coverage of the trial of seven men, the excellent film, "The Trial of the Chicago Seven" will read as incredible. Just unbelievable. For starters, men accused of being in a conspiracy had never met before that August.

For another, a judge appeared to be unqualified at least, viciously loony-tunes at most. For another, an eighth man's legal counsel was in the hospital. One less unbelievable aspect of this trial is that it went far deeper than protests against the Vietnam War: it snaked into White House revenge.

The Seven were charged with conspiracy as they fought against the Vietnam War by demonstrating and protesting at the Democrats' convention. Hayden tried to maintain peace, Hoffman tried to exploit the ridiculous, Dellinger tried to be a good Boy Scout. Mayor Richard Daley sicced his police force, in their "blue brain buckets," on the demonstrators.

Filming this event and the trial that followed challenged Sorkin as writer and director, but he succeeded in manifold ways. He used archival film sparingly, and he enfolded the various camps and sidebar conferences to tell the congested and convoluted story as cleanly as possible. He drew from his cast exemplary performances, with each actor -- especially Cohen, Langella, and Redmayne -- personifying his role completely. What Sorkin achieves in the last scene in the courtroom, in Hayden's Last Stand, serves as catharsis, meet and right and historic.

"The Trial of the Chicago 7," the epitome of excellence, comes at just the right time: to show today's protestors some of the shoulders on which they stand.