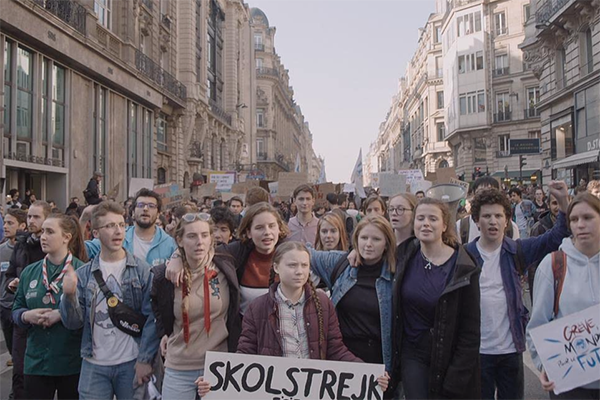 'I Am Greta' Records Thunberg's Story

Climate activist Greta Thunberg's adolescence has been described at length in newspapers and news magazines. "I Am Greta" is an intimate documentary that knits those public stories with private footage not seen heretofore. The result is a vignette recorded for history in one film.

Swedish director Nathan Grossman begins with Thunberg at 15. The girl sat down in front of the Swedish Parliament building with a sign declaring that she was on strike from school. "Why get an education," she answered questioning passers-by, "if there is no future for me?" Thunberg had done her homework: she knew the global impact on the earth if corporations continued to exercise unlimited greed, if we continue to trash the earth.

Grossman follows Thunberg from conference to assembly and to her wind-powered voyage across the Atlantic Ocean to speak at the United Nations' Climate Action Summit.

Speak she does. Whenever the film records bureaucrats' empty promises, it provides atmosphere. However, the minute Greta Thunberg speaks -- to teach or scold about the global climate crisis -- the young woman's very anguished being is articulated. Grossman follows her as she becomes more popular, more countenanced, more understood, but also more maligned, more pawed, more crowded, and more pressured. Efforts to either apotheosize or damn her would be hard to tolerate if she were an ordinary, bright and sassy young woman. But she's not.

She's shy. She's on the autism spectrum with Asperger's (she has wished everyone were so afflicted so we could see what she sees). Sometimes, she can't be bothered to eat, and her father must importune her to stop studying or editing just to bite a banana.

"I Am Greta" does not electrify in and of itself, but it does record a few years in the life of a dedicated young woman who makes a difference. This documentary can be filed with Malala Yousafzai's ("He Named Me Malala") and the Parkland youths' against gun violence ("Us Kids").