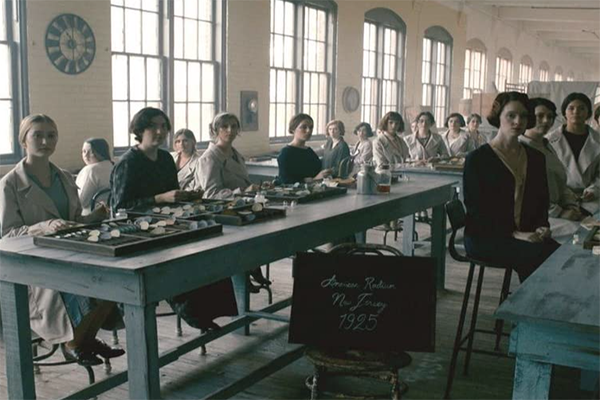 Radium, first identified by Marie Curie and her husband Pierre, was thought to be an amazing discovery. It was added to water. It was promoted as "liquid sunshine." The astounding dancer Loïe Fuller wanted a chunk of it to liven her costumes.

It ate at cancer -- probably saved Fuller's life. In World War I, radium lit up watch dials so  doughboys could see at night. But the chemical element is also a killer. It attacked the young women who were hired to paint watch dials in the Twenties.

In 2017, Kate Moore told the women's story in a searing investigative report called Radium Girls. Now a good film, "Radium Girls" tells the part of the story set in Newark but with fictionalized characters. Josephine and her sister Bessie work for American Radium (actually United States Radium Co.). Studious Josephine paints more dials than her peers, but star-struck Bessie hesitates to point the brush with her lips, avoiding the nasty aftertaste. Later, as she witnesses Josephine's teeth fall out, Bessie becomes convinced that their sister Mary had died three years before of radium necrosis.

Much of "Radium Girls" covers the 1928 trial brought by the young women against the owner of the company, who knew radium killed. The trial proceeds like later, similar efforts to prove that tobacco companies knew nicotine was addictive.

Ginny Mohler and Brittany Shaw's script tries to bundle the atmosphere of the Twenties, including flappers, King Tut, and spirits. Mohler and Lydia Dean Pilcher direct "Radium Girls" at the same walk as Pilcher's recent "A Call To Spy." Production design by Emmeline Wilks-Dupoise and art direction by Gabriella Moses are noteworthy, as is the editing that adds verisimilitude with vintage films.

"Radium Girls" fits with Marjane Satrapi's "Radioactive," a sterling effort about Marie Curie, and both complement Radiant, a dual biography of Curie and Fuller, due out next year. These stories must be told even today because a Geiger counter, waved over the grave of a radium girl, clicks for 1,000 years.