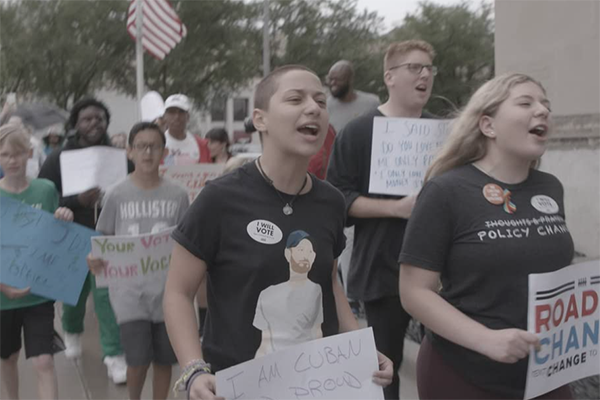 Kim A. Snyder's filmography includes "Notes from Dunblane: Lesson from a School Schooting" and "Newtown." She brings her sensibilities about horrific massacres at schools to her admirable direction of "Us Kids." This documentary follows five surviving teenagers from the 2018 shooting at Marjorie Stoneman Douglas High School in Parkland, Fla.

She concentrates on the trajectories of Cameron Kasky, Jaclyn Corin, David Hogg, Emma Gonzalez, and Samantha Fuentes. Each one speaks alone, and each one speaks about the others. They had been in classes together, where they had learned about democracy, never thinking that they would be abandoned by the very systems they'd been tested on in class.

For these teenagers, the main message is gun control. They were turned into activists through the exigency of violence. They pushed for it by demanding accountability of politicians and with gun-toting citizens -- in their faces, with grace. They organized the successful, international March for Our Lives. Sam vomits -- on two different occasions -- at the microphone out of nerves and grief, but each time, she returns to deliver their message.

They counseled each other, comforted each other, encouraged each other. They bolstered each other through contacts with ignorant media. Snyder films the white students' efforts to enfold black students who have had similar experiences of losing classmates to gun violence but have not received the media attention of the Parkland students.

Throughout, Snyder edits scenes of optimism and resilience against scenes of breaking down or taking breaks. No matter what the director does, it's impossible to watch these stalwart young people without weeping -- for their losses as much as for their gains. It's impossible not to feel the effects of gun violence through them. And that's her -- and their -- point.