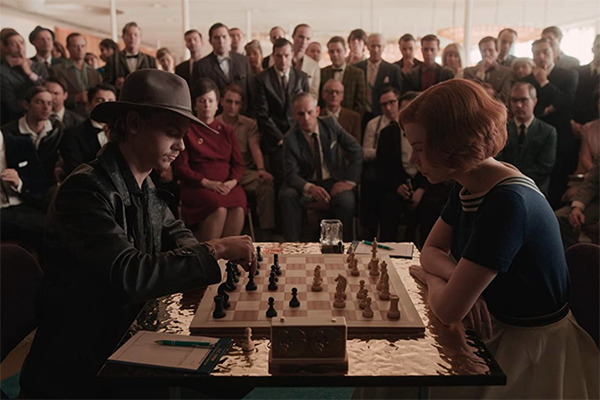 "The Queen's Gambit" Plays Across The Board

Walter Tevis has been dead since 1984, but his influence on film continues. His novels -- The Hustler, The Color of Money, and The Man Who Fell to Earth -- became unforgettable movies. A fourth work, The Queen's Gambit, proves equally as sterling as realized in a seven-part series for Netflix.

It's a sports film played not on field or court but on a board. The sport is chess. But "The Queen's Gambit" is not all about chess although knowing nothing about the ancient game does not deter from its thrills. Tevis' story, as written for the screen by director Scott Frank and Alan Scott, is also a bildungsroman about a young woman coming of age, stabilized by a male-dominated game.

Beth Harmon learned how to play chess from the janitor (a perfect Bill Camp) at a Christian orphanage to which she was dispatched at 8 (played well by Isla Johnston). Except for her mouthy friend Jolene (Moses Ingram's promising debut), Beth feels terribly alien before discovering chess.

She has to learn not just chess moves but the whole world of competitive sports -- tournaments, clocks, notes, etiquette, and history. To this world, she brings the detritus of her young life -- tranquilizers and booze and self-loathing. She is finally adopted by a woman more fragile than she (Marielle Heller); those two bond, sometimes deep in the "valley of the dolls." And she is taken under the wings of male chess players, opponents and supporters (including Thomas Brodie-Sangster and Harry Melling).

As Beth, Anya Taylor-Joy ("The Witch") with her Bette Davis eyes, centers the film, whether leaning over a board or a book or booze.

Scott Frank varies the progression to the thrilling end with just enough flashbacks in the plot. Stephen Meizler's cinematography offers multiple ways of looking at Beth and at those chess boards. He highlights the efforts that the chess consultants, Garry Kasparov and Bruce Pandolfini, put into recreating actual games from history, but he also has to capture the way Taylor-Joy personally choreographed every move.

"The Queen's Gambit" works because it's about more than chess. It's about growing up against odds.