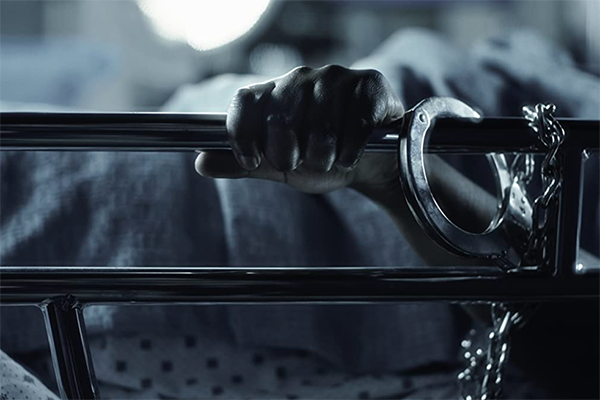 'Belly Of The Beast' Slaps Eugenics Back On The Table

Some documentaries, like the ones on extreme surfing, take viewers places they would never go except in film. Others merely inform. But some, like "Belly of the Beast," infuriate from the first frame to the last. No one should watch this without becoming exercised over racist exploitation of eugenics.

The general concept of eugenics, as developed by Sir Francis Galton, was to improve the human race. Nazis practiced eugenics against Jews, other ethnic minorities, and the disabled. Believe it or not, eugenics continues to be practiced in the United States. Specifically, obstetrician/gynecologists have been deciding that incarcerated women of color should not reproduce. Ever again.

For more than seven years, director Erika Cohn followed Cynthia Chandler, a lawyer, and survivors of sterilization in the battle against the California Department of Corrections.

Chandler's raging adolescence, raging against the world, aligns her with many of the women behind bars. The principal survivor is Kelli Dillon, imprisoned for stopping her husband from killing her and their little sons. Having missed their growing up, she kept herself hopeful with the thought that she would serve her time, find a man to love her, and have another baby. She was not 30 when she discovered that a "routine gynecological operation" to eliminate a cancer that turned out not to be in her womb was actually sterilization.

Dillon and Chandler discovered a series of sterilizations -- completely illegal -- at Central California Women's Facility that demanded to be addressed and altered. Despite defeats, they focus their anger on presenting evidence. Dillon goes from a cowering inmate to a free woman campaigning for her sisters.

Cohn's film also focuses on facts without wallowing in easy sentimentality -- not that feelings and compassion and heartbreak are not recorded. Prisoners' views, specifically, like women's views generally, are often suffocated, but "Belly of the Beast" admirably records and fully amplifies them.