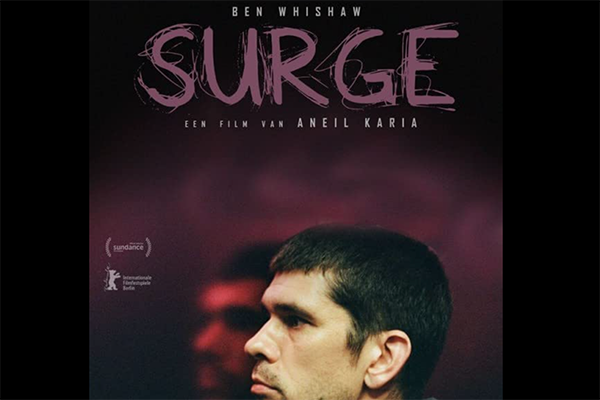 There is one reason, and one reason alone, to watch "Surge": Ben Whishaw. He is an amazing actor. He was Uriah Heep in "The Personal History of David Copperfield" and Michael Banks in "Mary Poppins Returns." He voiced in "Paddington" and co-starred so well in "The Hour."

He now stars in "Surge." Seeing him perform the role of Joseph rewards viewers, but watching "Surge" for any other reason requires commitment beyond being part of the Wishaw fan club.

"Surge" covers 24 hours in the life of a man losing it. Losing everything -- his hold on reality, his will, his sanity. The script by Rupert Jones, Rita Kalnejais, and Aneil Karia is not easy to follow as it mirrors Joseph's descent into madness. Nor is it easy to follow as directed by Karia with a wobbly, hand-held camera. The camera means that viewing this day of Joseph's falling down comes at a distance, with the gap hard to close between audience and screen.

First, Joseph seems to be just annoyed in his job as an airport security agent in London. He's hardly distinguishable from any other bloke. But his job is difficult, demanding, requiring him to be patient and considerate despite the behavior of travelers under stress. To steady himself, Joseph bites as if he's eating glass.

He leaves the airport and prowls through London. He behaves like a criminal without morals, only instinct, anger, and lunacy.

The result is an acting exercise, really. Once the plot is divined, there is only Wishaw to observe, and once he is seen for all his talent and drive, it's enough. The story does not ask for range, only intensity and focus.

"Surge" is one of those films that, half-way through, will have viewers -- even the most ardent fans -- saying, "Enough. I get it." Maybe "Surge" will play better shown for acting classes than in theaters, even those at film festivals, or streamed with the "off" button handy on the remote.