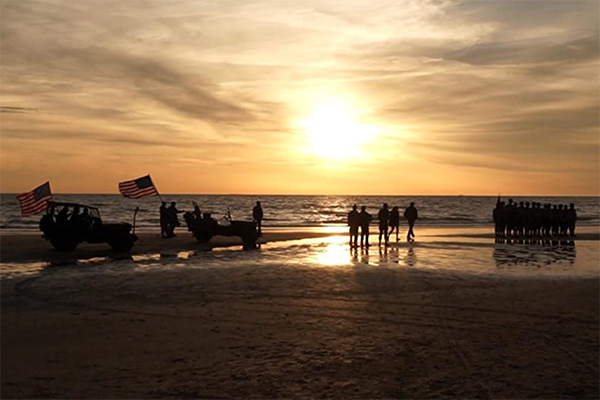 People who remain interested in the history of D-Day, June 6, 1944, will find much to absorb in "Sunken Roads: Three Generations After D-Day." This documentary differs from other History Channel-types due to the presence of the filmmaker, Charlotte Juergens. She concentrates on the veterans, not on the paratroopers’ generals, in an effort to connect with her great-grandfather Pat.

He was there on the beaches of Normandy as the Allied forces effected the liberation of French land that had been occupied by the Nazis for four years. Juergens' mother had audio-taped her grandfather before he died, and that voice of memory gave the younger Juergens the impetus to make this film about Granpa Pat's brother veterans.

Through persistence and finagling, Juergens accompanied Don McCarthy, a 90-year-old veteran, to the 70th anniversary of D-Day. McCarthy traveled with his cousin Bill, both veterans of the 29th Division -- more specifically, the 116th Regiment, so-called, the "Stonewall" regiment because its history goes back to the Civil War.

The McCarthys, along with two other vets, filled in Juergens on their personal stories of that historic battle. Their memories are focused as their tears -- and hers -- flow from the trauma of telling.

The filmmaker and the men endure ceremony after ceremony as the French people, especially those in St. Lô, welcome the liberators, now on canes and in wheelchairs. In particular, McCarthy is embraced by his French friend, the brash Suzette, who has her own memories of that campaign. Juergens also meets with Joe Balkoski, who wrote the "bible" of the story of the 29th Division. He shows her foxholes that held the fighting men.

Juergens' film comprises fresh coverage of the anniversary ceremonies as well as vintage photographs of the men when young and vibrant. She adds the pictures of history to accompany the men's memories and to expand viewers' knowledge.

"Sunken Roads," is an exploration of memory. Juergens' mellifluous voice serves as escort as she not only describes the current and historic events but also analyzes her own ceremonial responses and familial connections. "Sunken Roads" adds to an understanding of history from the people in the room, on the landing craft, and on the beach.