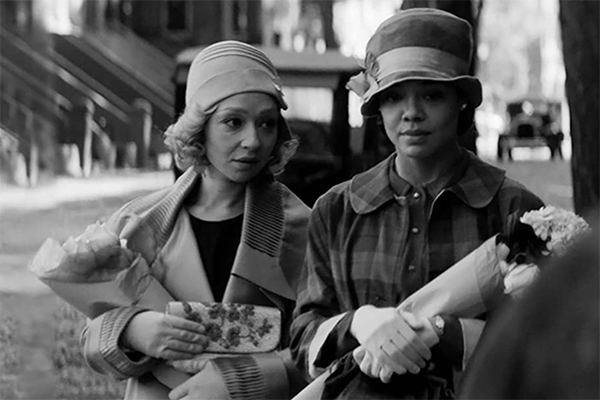 In 1929, four years before St. Louisan Fannie Hurst wrote Imitation of Life  and nearly 100 years before Marie Benedict wrote The Personal Librarian, Nella Larson wrote Passing. In doing so, Larson, a Black nurse and librarian, established herself as part of the literary movement known as the Harlem Renaissance.

All three novels focus on the art and agony of pretending -- here,  Black women passing as white. Writer/director Rebecca Hall, who first read Larson's novel a decade ago, honors Larson's exploration of family, of color, of secrets with this exemplary film.

Larson's plot and Hall's script follow the story of two light-skinned Blacks. They were chums in school despite differences in class, but they've been apart for years. However, Clare Kendry recognizes Irene Redfield's laugh when they meet in a whites-only hotel. Irene, nervously and temporarily passing as white, peers Princess-Diana-like from under the brim of her nearly transparent hat. Clare lives her whole life as a white woman in high society; she is married to a man who adamantly declares to his wife and her friend that he hates Negroes. "Passing" revolves around the two women's reaching and searching for more. Jealousy is inevitable, for Clare is a flirt with flair.

Cagily portrayed by Tessa Thompson ("Dear White People"), Irene cautiously edges around Hall's admirable script. Ruth Negga ("Loving") rims Clare's nonchalance in primordial fear of being found out. Bill Camp plays Hugh, and his expository scenes with Irene brilliantly belt in the film's themes:  "Things aren't always what they seem" and "We're all of us passing for something or other."

Hall wisely shot in the 4:3 aspect ratio that defined celluloid film of the Twenties. That choice supports close-ups on the characters' faces, which suggest an attraction between the women. Hall also smartly shot "Passing" in black and white, undergirding the very point of race as well as honoring the historical time frame of the story and the film.

"Passing" moves slowly, allowing time to admire the period furniture, brownstones, and filmy, dropped-waist dresses. The film's pace is as deceptive as the characters' lives. Rebecca Hall's "Passing" expands Nella Larson's story beyond the Nineteen-Twenties into the Twenty-Twenties.