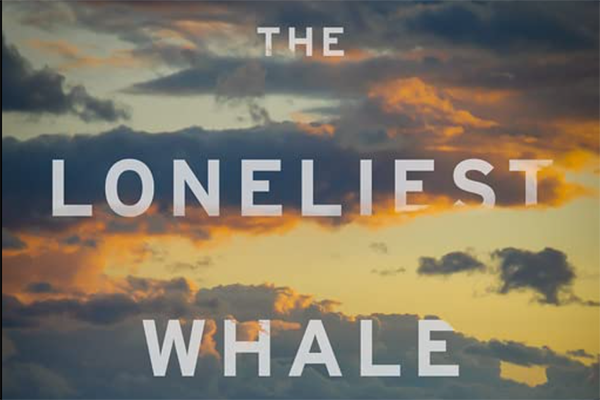 Watching "The Loneliest Whale" is a little like being on an actual whale watch. Whether in Baja, Mexico, or Bar Harbor, Maine, you hope for a sighting, patiently watching the water for the rising up of the largest mammal. Even if none arise, you enjoy the journey out to sea.

The documentary tracks attempts by oceanographers to find a whale identified as 52 for the sound it makes at 52 Hertz, a frequency seemingly unrecognized by other whales. A whole mythology has grown up around this whale, ever since its sound was detected by Dr. Bill Watkins in the Fifties. Thus, its alternate name: "Watkins' Whale." Watkins died having never found 52.

Scientists believe that 52 is a loner, that it has never run in a flote or a pod and, thus, its appellation as the loneliest whale. A mythology developed around this solitary whale that enveloped lonely people identifying with the protagonist. Accompanying this tale, of course, is that Herman Melville story about the white whale known as Moby Dick, which is included among the images and narration in the documentary.

Instead of whale hunters led by Capt. Ahab, a group of ocean scholars, from places like the Marine Mammal Institute,  head out to sea for seven days, each day breaking the film into chapters. They go, says one, "for the chance to do something epic." They bear sound devices and all the technology available that Watkins never had including  Sonar developed by the Navy, drones, and tracking devices.

To fill in between days, director Joshua Zeman, who wrote the film with Lisa Schiller, includes information about whale-hunting, ancient and modern (the latter so gruesome it's nearly impossible to watch). Zeman interviews with experts include the great Roger Payne, credited with changing the attitude toward whales in the Sixties by recording them: "They sing!"

Music by Alex Lasarenko and David Little adds to the tension of the hunt, and Nelson Hume and Alan Jacobsen's cinematography captures the vastness of the ocean, augmented with maps and charts.

"The Loneliest Whale" is a hybrid documentary, as much about loneliness as a human experience as it is about a whale and its weird song. As one of the scientists says, "Every story has an ending even if it's not the one expected."