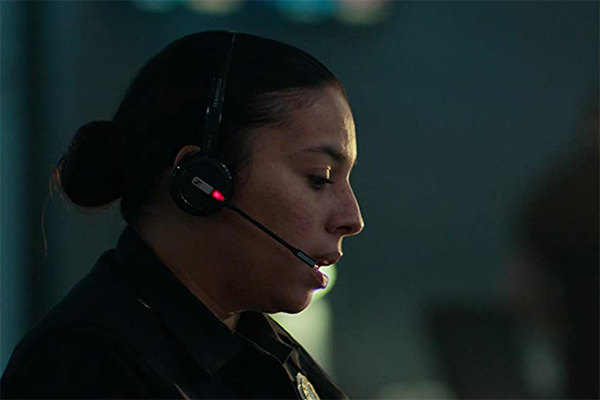 Imagine you're a hard-driving policeman reduced to desk duty for a major infraction. Imagine that you're consigned to answering 9-1-1 calls, each response starting with "Emergency operator No. 625. What is the address of your emergency?" Then, imagine a call from a whispering woman, claiming to have been kidnapped.

What Joe Baylor does is become the officer he was trained to be without ever leaving his station. He tries to calm the woman, who seems to be talking with her child. He must extrude details from her that will help him locate her. What color is the car she's in? What California highway are they on? Is the driver armed?

Meanwhile, a reporter from the L.A. Times  calls him on his cell phone; she wants to hear his side of the story before he goes to court the next day. He calls the officer who's going to vouch for him. He calls his wife. He sucks air from an inhaler, his  asthma acting up.

Jake Gyllenhaal plays the officer under the direction of Antoione Fuqua, known more for action films. The camera is always on Joe on the phone, its focus on his eyes as dark as his hair and shirt and on his face, increasingly sweat-beaded. The red light indicating an open phone line winks in the corner. Despite Gyllenhaal's seeming one-man show, there are people all around Baylor, including the voices or presence of Ethan Hawke, Riley Keough, Da'Vine Joy Randolph, Paul Dano, and Peter Sarsgaard.

Gyllenhaal us one of the producers of this remake of the Danish entry as Best Foreign Film of 2018. He gives Joe Baylor a wide range of hysteria, fright, concern, and frustration. He plays up Nic Pizzolatto's screenplay, which is more sensational than the original, which felt creepier for being subtler. Still, "The Guilty" is unpredictable, heart-stopping, and, most of all, imaginative.