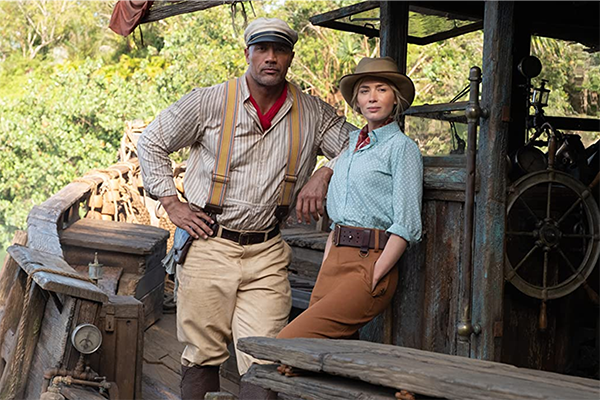 Erase all thoughts of Humphrey Bogart and Katharine Hepburn from your mind. Delete scenes from "Raiders of the Lost Ark." Pretend you're back at Disneyland on the Jungle Cruise because it lasts eight minutes compared to the film's 127. “Jungle Cruise" equals a theme park ride in fake-itude.

The real watery ride has a better storyline than the film, whose plot exceeds the mud quotient of the Amazon River. Something about a feisty botanist named Lily, tired of being trodden down by her male colleagues (term used advisedly). Something about searching for a flower, called the Tears of the Moon and touted as a panacea. Something about a Great War.

For the Bogart touch, a captain of a sinking ship banters with the botanist in a script constipated by Michael Green among a committee of writers. But for all Dwayne Johnson's maturation as an actor, the Rock ain't no Bogie. And as winsome as Emily Blunt has been ("Quiet Place," "Mary Poppins Returns"), she's no Kate (she is athletic, however -- she brachiates on the rolling ladders of a library, something every Anglophile bibliophile wants to do, really).