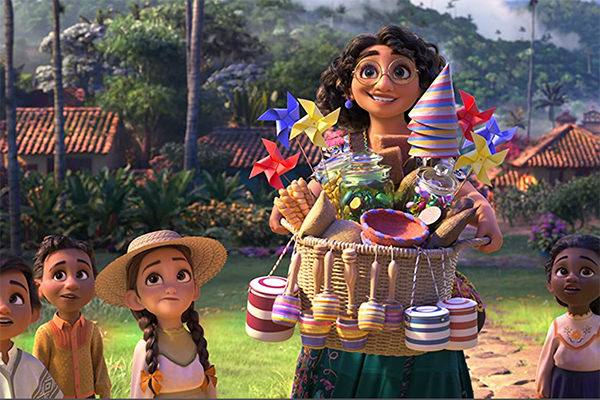 Animation so often suggests a movie for "the children," but two entries require a bit of consideration. Both "Encanto" and "The Mitchells vs. the Machine" follow the pattern established by "Sesame Street," that is, something for almost everyone. Each film appeals to children, although not wee ones, as well as to grown-ups.

"The Mitchells vs. the Machine," directed by Michael Rianda and Jeff Rowe, has been available on Netflix since March, but it's getting a push now in awards' season. The Mitchells comprise a dad (Danny McBride), with appropriate bod; a mom (Maya Rudolph), who's sweet as apple pie; a son besotted by dinosaurs; and a daughter.

What a daughter. Katie (voiced by Abbi Jacobson) wants to quit this family to join "her people" at film school. Dad has different ideas: how about a road trip? Enroute, the Mitchells encounter a robot apocalypse. Look for smart phones, Roombas, and Furbys (totally evil) to kill the humans, but not, you'll be glad to know, on the Mitchells' watch.

The other fierce family in the Colombia of Animationland is the Madrigals. They are magical after surviving a tragedy a few generations ago. All except for Mirabel (voiced by Stephanie Beatriz). The family is led by the matriarchal abuela (voiced by María Cecilia Botero), and each member has a talent. Mami can heal wounds, one sister hefts heavy loads, and another makes the flowers bloom.

But Mirabel sees that her magic casita is cracking and so is her family. She has to wonder if the estranged uncle Bruno (John Leguizamo) is involved.

Directed by Jared Bush and Bryan Howard, "Encanto" sends all the right messages and does so with color and song. Lin-Manuel Miranda's song, "Columbia, Mi Encanto," rises above a few that lack luster.

Both "Encanto" and "The Mitchells" offer frenetic pacing, fabulous color, and vivid imagination, but both works require caution from grown-ups who think animation is fair game for every little one. Remember, even "Bambi" was traumatic.