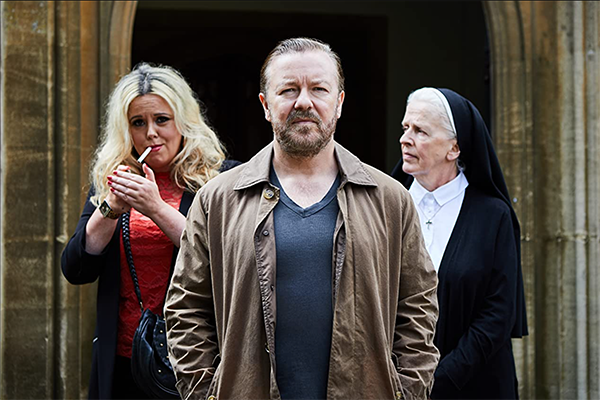 'After Life' continues to explore grief with humor

To answer the loudest question, No. The third and final season of "After Life" is not so knife-sharp as the first two. It cannot be. "After Life" follows the grief-strewn path of Tony Johnson as he tries to wrap his broken heart back together after the death of his dear wife Lisa. He also had to care for his dying and demented dad.

And he had a job to do. Tony is a reporter for the Tambury Gazette. He interviews his neighbors, such as the writer who has ground out 50 bodice-ripping novels. Or the vapid swingers. These laughable interviews make Tambury a bit like Dibley without the vicar. Tony cannot believe these people because his grief matters more than their little lives.

The six episodes of Season three fly by with each episode evanescent as water through reeds. In each, Tony talks to the man who's moved into his father's room -- and role. He escorts Emma (Ashley Jensen), a nurse at Autumnal Leaves Care Home. He counsels Colleen, the new intern, and Kath (Diane Morgan), the newspaper's long-time sales rep. Tony beats his brother-in-law Matt at every sport. He does not suffer fools. He talks with Anne (Penelope Wilton), the widow who visits her Stan every day while Tony visits Lisa (Kerry Godliman) in the cemetery. And he watches Lisa  on videotape as he pets his life-saving dog.

Each episode softens toward the end. Tony is not quite so cutting, but, through the sharp pen of writer Ricky Gervais, he can still sling barbs. And Tony, like Gervais, remans an atheist even though Lisa believed in an after life. When he declares to Anne on their cemetery bench that there are no such thing as angels, she gently chides him. "Yes, there are," she says. "They wear nurses' uniforms. Some have four legs and bark."

And that's the point of Season Three of this amazing and very realistic show.

This whole series has Gervais'  handprints all over it. That's a good thing. He wrote the dialogue, he directed, he petted that gorgeous dog, he selected the utterly vital music. He plays Tony as hysterically funny and heartbreakingly sympathetic. "After Life" is that rare look at grief that does not shy away from searing pain or shocking humor.

The end of this elevating, energizing series may cause confusion, but the conversation that follows "After Life" will add one more layer to Gervais' admirable foundation.