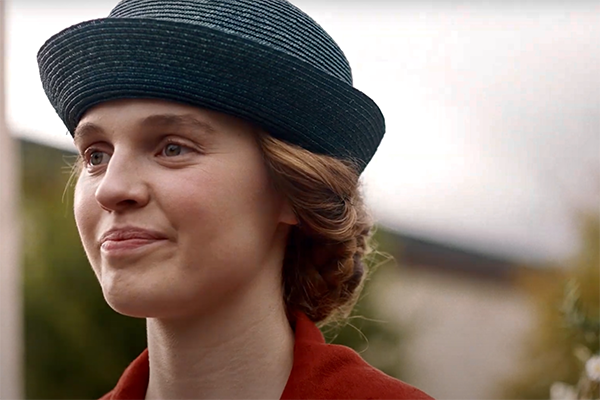 What does a filmmaker do with a stunning novel that is more style than plot? If you're the French director Eva Husson, you make a film that is your own style. She blessed Graham Swift's brilliant and brief 2016 novel, Mothering Sunday, with her style, thus making the film as transcendent as the novel.

Since she was a 16-year-old orphan, the aptly named Jane Fairchild has been "in service." She currently serves the Nivens, but for years, Jane has been having an affair with Paul, the scion next door. Their last tryst falls in 1924 on Mothering Sunday, the British version of America's Mothers' Day in May. The day changes Jane's life forever. Paul's parents and the Nivens plan are to announce his engagement to Miss Niven at lunch, but before that, Jane and Paul rendezvous in his empty house. When Paul leaves for his engagement party, he encourages her to troll through his house. Fully unclothed, she sniffs his books as she sniffed the shirts in his cupboard.

Their love affair is but one secret in the complex story. Alice Birch, who also sympathetically transferred Normal People from the page to screen, agilely handles the film's story layers. Jumps in time covering Jane's long life require patient attention, comparable to that in "The Hours." Eva Husson directs the love scenes with honesty like that in "Normal People"; the curtained light in their love nest echoes Andrew Wyeth's in the Helga series. Husson brings the camera pore-close to faces; she etches significant words on screen. She adds symbols of white with panache: stained sheets, a horse's flying tail, a smoke plume. Husson understands that film can provide vision unavailable to the page, an honor manifested brilliantly in the film, "Mrs. Dalloway," whose camera surpassed Virginia Woolf's pen dipped in stream of consciousness.