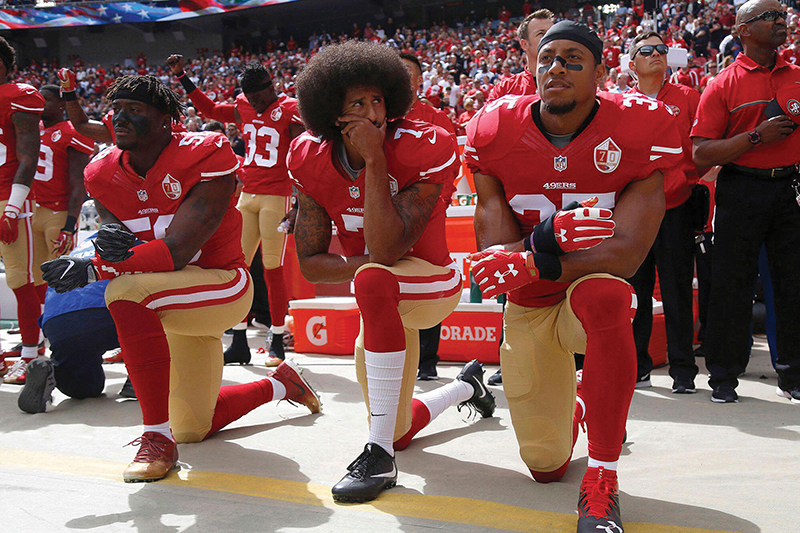 In 2017, San Francisco Forty-niners quarterback Colin Kaepernick took a knee at a football game during the national anthem. Others stood. Kaepernick was not protesting the flag as simple-minded people decided: he was protesting police brutality in America.

To set up that peaceful protest, the directors Tommy Walker and Ross Hockrow of this moving documentary show Kaepernick as a biracial child adopted by white parents. The directors collage pictures of his dark face with the white faces of his blond family. They also interview April Dinwoodie, who teaches about transracial adoption. She fits Kaepernick within that context. "You're judged on appearance, not substance," she says. What seems like a side note takes on significance.

Before the black and white collage, the directors of "Kaepernick & America" show the burning of a jersey -- No. 7, Kaepernick's number. And they record the rapture of the people in his hometown when he became a professional football player. Folks at the local restaurant named a sandwich for him. They erased it from the menu after he protested.

Walker and Hockrow record Kaepernick's rise and fall -- year by year, season by season. They refer graphically to police shootings from Michael Brown in 2014 to George Floyd. They show a montage of Kaepernick on his knee from the time he was a boy. They include scenes from 2012 of his kissing his bicep, and they interview coaches Jim Harbaugh and Hue Jackson. The filmmakers include commentary by activist DeRay Mckesson in his signature puffy blue vest. He says of white supremacy: "The dominant culture has to silence critique." Television journalist Don Lemon, one of the producers, comments as do sports reporters Pam Oliver and Steve Wyche. Football player Nate Boyer talks of having suggested to Kaepernick that kneeling is honored in religious practice.

Walker and Hockrow include former basketball player Mahmoud Abdul-Rauf, who was benched for not standing for the anthem, and runner Tommy Smith, who raised his fist at the Olympics. They show the political culture of the times, from Donald Trump's rise in 2016 to Robert E. Lee's statue's fall. Walker brings all his good sense to this film, having produced the brilliant "Toni Morrison: The Pieces I Am."

Through it all stands Colin Kaepernick, growing in maturity as an activist, always kneeling, never backing down.