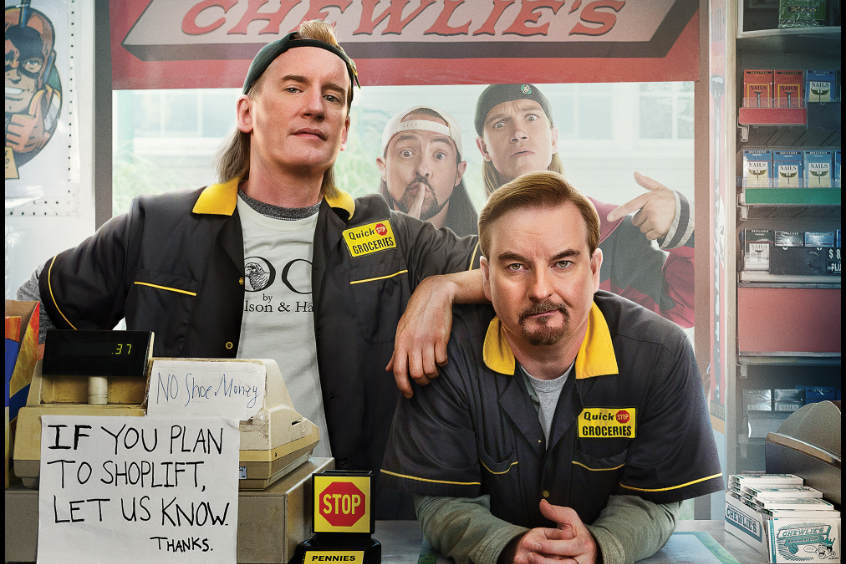 Kevin Smith's "Clerks" appeared in 1994 without a Roman numeral  because who knew there'd be more? Then, in 2006, after directing "Mall Rats," "Chasing Amy," "Dogma," and "Jay and Silent Bob Strike Back," Smith struck back with "Clerks II." And, now (cue the kazoos), "Clerks III" asks audiences to see that slackers can go deep.

It's a trudge. For the cast of characters to be more than foul-mouthed, testosteronic, and imbecilic buds, Smith asks audiences to allow for them to consider Life, Liberty, and the Pursuit of Longevity. Smith wrote and directed "Clerks III" in the New Jersey convenience store, Quick Shop, where it all began.

Here, boys play hockey on the roof despite long lines of customers. Here, customers are not euphemistically called "guests." At this store, a sign at the register begs, "If you plan to shoplift, please let us know." And this is the sort of movie where youngsters are told, "That's how we did it in the Nineties, son."

The plot (term used broadly to complement the humor) centers on the misadventures of clerks Dante Hicks (Brian O'Halloran) and Randal Graves (Jeff Anderson). Graves' surname forecasts a through-line, for Randal suffers a heart-attack, a "widow-maker," according to his sassy doc (the scene-stealing Amy Sedaris). He survives. Now, what?

Well, since that aspect of the plot parallels Smith's life, a look thereto will frame the rest of the plot: Graves decides to make a film about his life's contributions. He inveigles Dante, who has his own shadow story, to join him along with his super religious co-worker (Trevor Fehrman) and resident stoners, Jay (Jason Mewes) and Silent Bob (Smith) .

The film-within-a-film also brings in actors to audition, which encouraged Smith to show off his friend circle including Justin Long (speaking through his nose), Sarah Michelle Geller, Ben Affleck, and Fred Armisen. Those auditions are easily the best part of "Clerks III."

The film plows into the psyche of grief, but there's still plenty of goofiness in word and deed. Examples include that the ultra-religious characters are said to be "holy ghosted" on the Internet plus the correct answer to the question on viewers' minds concerning Graves' motion picture: "What's the movie going to be about?"

"Clerks III" is more serious than I and II. Getting there requires patience and tolerance -- and interest.