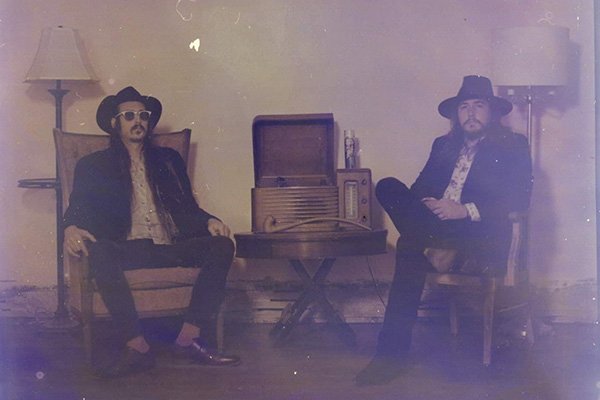 Jake and David Maness, a.k.a. The Maness Brothers, have built a steady following and reputation in St. Louis, as well as across the U.S. and abroad, over their nearly a decade as a duo, playing heavy blues-steeped rock influenced by everything from Canned Heat, Steppenwolf and Jimi Hendrix to the legendary Hill Country Blues men.

"We definitely think of ourselves as a rock 'n roll band," says drummer/vocalist Jake Maness

On Tuesday, February 4, they'll hit The Stage at KDHX as part of the Listen Live and Local concert series, previewing material from their forthcoming full-length record, "God Bless The Maness Brothers." The album will be available in St. Louis at the band's album release show on May 1 at Off Broadway. It's their second release on Romanus Records, which will also have the album available online for purchase. After the release, they'll head out on a lengthy supporting tour including Europe, Alaska and a good portion of the mainland U.S.

"In comparison to our last self-titled release, we've moved on from a more lo-fi recording vibe to something a little more crisp," Jake says. "This record sounds closer to our live performances than anything we've released in the past."

As brothers, Jake and David grew up listening to and playing music together from a young age.

"I was in the 5th grade when I first got a drum set and had been taking lessons before that," says Jake. "We had always jammed together on and off. I'd fill in at practice sometimes with Dave's bands in our basement, but it wasn't till around 2012 when we started the band."

Though they remain a two-piece at the core, the Maness Brothers have a variety of musician friends who play with them on recordings and at live shows here in St. Louis. The new album features guests including Al Holiday, Irene Allen, Alex Sinclair, Kari Liston and Maureen Sullivan. The Brothers also host a regular residency at Livery Co. every second Friday of the month where they are joined by long-time friend Chris Moonier on keys and Ned Watson on bass.

In their early days coming up as a band in St. Louis, they were inspired by other local musicians like the Rum Drum Ramblers and the Big Muddy Records crew.

"These days we've been doing it for almost ten years and it starts to feel more like a big group of friends, or maybe we just tend to play music with the people we love at the places we love when we're not doing that on the road," says Jake. "St. Louis has a lot to offer and there are a lot of talented people hiding out here."

Article photo by Josh Basco and courtesy of the band.

Come be part of the studio audience, tune in on 88.1 KDHX or watch the live web stream on the KDHX YouTube channel.

Related:
Watch The Maness Brothers perform live in the KDHX studio on on 8/21/17.