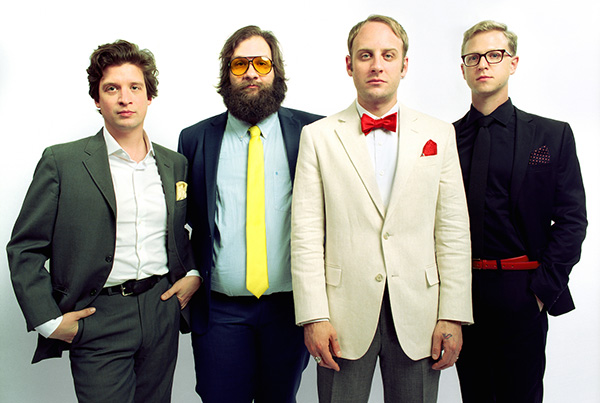 After Deer Tick’s release of their second album, “Born on Flag Day” in 2008, it didn’t take long for the rock world to recognize them as one of its own. Nor did it take long for John McCauley to cement his reputation as a hard-drinking, hard-living, frontman to a no-holds-barred performance where the only thing guaranteed was a dedication to music and McCauley’s unique graveled vocals.

When McCauley married singer-songwriter Vanessa Carlton and they had a daughter, many thought it would be the end of Deer Tick as the world knew them. And it almost was. As he was packing for a leg of the tour for the long-awaited latest albums “Vol. 1” and “Vol. 2,” McCauley discussed what could have happened, what almost happened, and the future of Deer Tick.

After the release of “Negativity” in 2013, McCauley wasn’t sure of the future of the band.

“Personally I just wasn’t sure if I wanted to keep doing it anymore. For a moment there, I just kind of felt like, what’s the point? We never really stopped playing, we just stopped playing often. I think we did like one or two shows a year,” McCauley said. “I just got used to not playing with everybody and it felt comfortable.”

He credits the Newport Folk Festival in 2015 as a catalyst for solidifying the group once again.

“We had a really good time that year at that festival and that convinced me that we should go try to make another album which turned into two albums,” he says of “Vol. 1" and “Vol. 2.”

The two album gave Deer Tick enough bandwidth to split the harder, punk-influenced songs from the folk. Before, releasing a single EP often juxtaposed the sounds oddly, at least in McCauley’s opinion. This made the album cohesion difficult. “Vol. 1” and “Vol. 2” are different. “I would say this album is successfully sequenced,” he affirmed.

Before the two new albums were confirmed, McCauley did consider leaving the band, possibly for good. Of that decision, he says, “There are still other things that I would like to do with my life that don’t have anything to do with music. And it seemed like a good time to take on some new challenges in my life,” he states. “But I was wrong.”

McCauley laughed and continued, “Now we are back in the swing of things and it’s fun once again. I know I’m looking forward to our shows.”

Though now, the choice between music and life doesn’t appear as an either/or. McCauley sites varied interests and active engagements. He would like to live and work in Japan and studies Japanese. He considered formal schooling and he is “curious about high altitude mountaineering,” a curiosity which is leading him to the summit of Mt. Baker this summer.

Most proudly, he reflects upon his family. “I just like hanging with my daughter and seeing what she is into.” He declared loving fatherhood. “My kid makes it easy on me. She’s a good kid.”

Of his former reputation as a “party animal,” McCauley jokes that now his antics are “more scheduled.” He explained, “I can’t drink the same amount of hard liquor I used to, that’s for sure. It’s a good thing. I still enjoy drinking beer. But I wouldn’t call myself a party animal anymore. I didn’t know when was a good time to party, so I just partied all the time.

“It kind of ran my body in to the ground after a while. I had a lot of trouble singing because of the things I was doing – cancelling a lot of shows. I had a rough patch for a while,” he explained.

McCauley credits “getting kinda serious” with his now wife, Vanessa Carlton, as a catalyst to “dry out one summer and see what I could learn about myself.”

He learned he wasn’t addicted to alcohol and could withstand the physical difficulty of withdrawals. He says it also altered his perspective on a lot of things – including touring.

“I really put a lot more in to our performances now – just being more present and caring about hitting the notes and playing well. And I think it shows. Our last tour, doing two sets every night was a big success for us. I’m proud of what we have been able to accomplish with a few little tweaks here and there,” he explained.

McCauley doesn’t write on a schedule, hasn’t fallen for the Nashville ubiquity of co-songwriting with the talent which abounds and doesn’t feel guided by a muse though wouldn’t turn from one should she appear.

He describes his writing process as, “pretty spontaneous. If I’m writing for Deer Tick I usually don’t go into the studio with everything completely finished. I wrap a lot of things up once I get there. It just starts with some words or a melody and I build it as fast as possible if I can. Some stuff I sit on for years before I get around to finishing it. I just write whenever I feel the need to – which is pretty random, all over the place.”

McCauley recalled the recording process, saying the band was “excited” about any limitations the all acoustic “Vol. 1” and all electric “Vol. 2” would bring. He explained, “It made it fun to record the rock songs with no acoustic guitars. Because that is such a common studio production trick – just layer a bunch of acoustic guitars under everything. To be a little more raw and unpolished in that way was fun. The acoustic record was fun to do because you dial back the volume and it gives the songs a chance to breathe a little bit. And it showcases your talent as instrumentalists a little more."

This talent is compiling into another album. McCauley explains, “We’re putting together a collection of demos and alternate versions of songs, mixed in with some covers and stuff like that. We’re looking to maybe put it out in the fall. Currently, it is an unfinished, slightly unfocused pile of stuff right now.”

His musicianship is stronger than it has been and he is optimistic about what Deer Tick can do next. Now a seasoned touring band, his advice for up-and-coming musicians, he says with a chuckle, is “don’t drive uninsured.”  Which sounds like a story.

As last words, McCauley says through laughter, “Come to our show. Make us feel good about ourselves.” He pauses to break between jest and intention.“I’m very much looking forward to being back in St. Louis, we always have a good time there.”

Deer Tick is playing at Delmar Hall on April 16th, and Deer Tick's "Vol. 1" and "Vol. 2" are available now on Partisan Records.