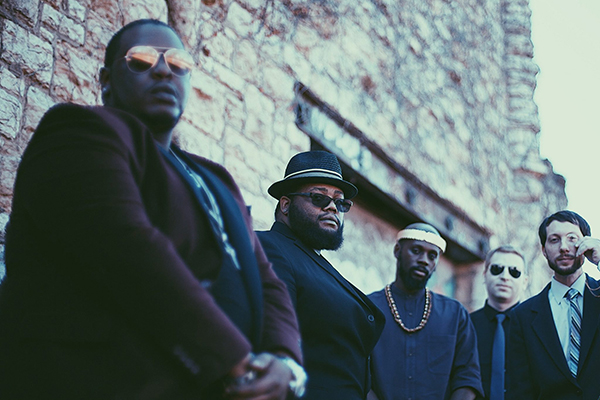 iLLPHONiCS will present “A Sensory Experience,” a one-time multimedia show featuring visual projectionist Max Cassily, at the Stage at KDHX on Saturday, June 2, at 8 p.m.

With the release of two politically-fueled, genre-bending albums in two years, hip-hop fusion veterans iLLPHONiCS are taking a minimalist approach in 2018. On May 25 the band released “X-Rated,” a "digital 45” with the songs “Breathe Like” and “Green Note$” available through Bandcamp and streaming services. In their return to the simplicity of a two-song release they’ve also zeroed in on the core of their sound by making a straight-forward hip-hop release. MC Fallout Morris and guitarist Kevin Koehler spoke with KDHX about the project.

KDHX: What prompted the idea of a digital 45?

MC Fallout Morris: It was an idea I had a while ago to go to this format. The group as whole concluded that we didn’t want to just put out albums, but take the time to treat each song individually and release them as we pleased and this fit right in with my idea of the digital 45 so it’s timing.

Kevin Koehler: The idea of the digital 45 goes back quite a while. I think I brought the idea up around 2010 or 2011. Larry liked the idea, but for whatever reason it didn't come back up until now, maybe we felt the idea was still a little too revolutionary at that time. I also think we had too much to prove back then and that putting out only two songs would be too meager of output. We also enjoy listening to vinyl so the physical media itself is a big inspiration. I personally love the idea of a main song with a companion song. One can be on the catchier side, one can go a little deeper.

You're coming off a two-year streak of releasing an album a year. How did that guide your decision to scale back to releasing two songs at a time?

Koehler: It takes a little pressure off promotion-wise. Putting out an album is a lot like putting all your eggs in one basket. So, at this point, I feel consistency is more important than the normal peaks and valleys of the album/tour routine.

Morris: It just doesn’t feel like people value the process of listening to an album, in my opinion. I think we come from an era that albums where an experience. You go to the record store, buy the album, get to your car or house and rip the packaging apart, listen through and see if the whole album is a banger and pick your songs, go to the insert and see who’s behind your favs … you know, the whole process. It drew you closer to your favorite artist. Now it’s less intimate and as much time as we put into constructing albums we figured we could focus on putting it into songs and just release them sooner.

Can you tell us what to expect on June 2 at The Stage? How did the collaboration with Max Cassily come about?

Koehler: Expect your senses to overlap. Expect some songs we've never played live. Max is someone I met while working a shift at Vintage Vinyl in probably 2014 or 2015. He was tapped by Hello Jizoo to do some visuals for a show I organized at .ZACK back in December 2017. I was pretty enthralled with what he was able to do, so we wanted to bring that element into one or more of our shows. We've wanted to do something visual with our shows for some time.

Even though you tend to get categorized as a hip-hop band, you've talked about this pair of songs the most fundamentally rooted in hip-hop that you've done. What prompted that?

Koehler: Part necessity, part curiosity. Recording drums in a studio can be very expensive and also, some of us live on the opposite side of town from each other. Sometimes it's more convenient to simply send files back and forth. Keith Moore, our keyboard player/singer, has beats for days. Personally, I'm an explorer and I'm excited to continue developing my engineering and production skills in this style, which relies more heavily on electronic instrumentation than what we've become known for.

Morris: We’ve always relished that we are recognized for our ability to make hip-hop work with everything. We’ve done it well from a live point and my rapping keeps the hip-hop element there, but we never approached songwriting from a more modern hip-hop production style and with these songs that’s been more of the wave for us. It’s really all in the production.

I've gotten a kick out of the promo campaign with the hints about this 45 being "for grown folks only" and such. It's interesting, since you've created so much music about serious subject matter, but it's sex that requires the warning. You've created music about Michael Brown's murder, but make two songs that are sex-positive and people might freak. Tell me about how you created this campaign.

Morris: Well honestly I think that people need to see we are very human. I was the one driving the boat on these songs as it’s currently what I want to talk about. We enjoy and share the same emotions and have the same needs as anyone else. People seem to think we don’t do 'certain' types of music and that’s a misconception we plan on killing fast. These songs are sex-positive and I’m happy we can show that you can want all the trappings of sex without being disrespectful about it. Look at it as less of a warning and more of an invitation.

How much did the focus on sexual harassment and assault, protecting sex workers, etc. play a part in releasing these songs now? If ever the time was right for a song about strippers not being lowly and another about open, consensual sex, it's now.

Morris: None, really. Just the universe I suppose. I just feel that people are scared to discuss sex now because they are scared of some witch hunt. I saw Tarana Burke speak recently and she said that’s far from the case, in this case in reference to #metoo. She said loosely that the movement is about bringing attention to sexual violence for both men and women, not suppressing folks and if you’re not a creep continue to be sex-positive and, for lack of better of words, shoot your shot. I fully agree and these songs represent that idea. It’s OK to like sex, be open about it and not be a jerk or hurtful with it. Lastly, I feel that strippers and adult entertainers still get looked down upon by the greater part of society, but we are embracing sexuality in so many other ways. This baffles me and I don’t think it’s fair as they provide a service that most of us, at some point, benefit from. Rather it’s attending a club or watching watching a video on a phone. That’s real.

Koehler: All I'll say is that Larry's timing is impeccable, rhythmically and thematically.

Any tour plans or shows beyond the June 2 event?

Koehler: We have a Hip-Hop Series we are curating at the Sheldon later this year. ShowcaseSTL is later in June; that's always fun. Based on a number of factors, 2018 isn't looking like it'll be our strongest touring year, but we'll definitely get out and about.

Do you have the next digital 45s recorded and ready? How many do you anticipate releasing in 2018?

Morris: We have a few recorded and I have to lay more, but the goal is to get about two more out before year's end – all with a different theme and vibe.

Koehler: We've got a handful of tracks nearly completed. We are honing in a system of production that began with last year's 'Purple Piano Society,' so the more we refine that system and keep the gears oiled will determine how much we can complete this year. I anticipate at least 3 additional digital 45s in 2018.

“Rated-X” is available on the iLLPHONiCS' Band Camp page and Spotify.