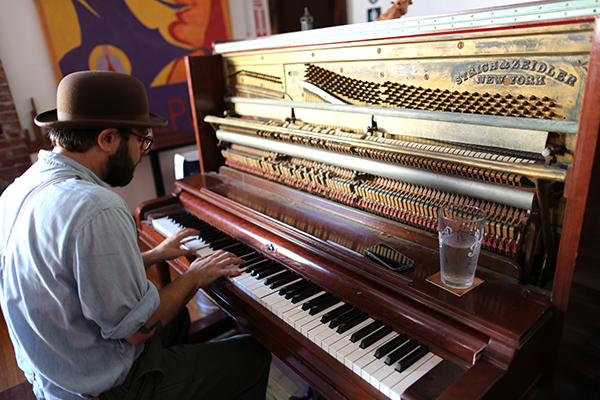 Ethan Leinwand Wants to Talk About the Barrelhouse Blues

Talented artists in St. Louis have made the city a mecca for blues aficionados. One of the region’s most acclaimed musicians is Ethan Leinwand, who has made his mark in the sub-genre known as barrelhouse blues.

The 35-year-old Leinwand plays piano for the popular retro swing band, Miss Jubilee. He’s also a member of the St. Louis Steady Grinders, the Bottlesnakes and plays a weekly solo gig at Yaquis. If that wasn’t enough, Leinwand has teamed up with Miss Jubilee lead vocalist, Valerie Kirchhoff, as well as horn and banjo player, TJ Muller, on a variety of homegrown music events. I sat down with Ethan recently to get a sense of what makes him tick.

KDHX: Do you remember when you first got interested in the piano?

Eric Leinwand: I took lessons as a little kid. I remember in late elementary school or the 6th grade, my brother played a backtrack on a keyboard and he said, ‘Oh I made this up.’ And I said, ‘You can do that?!’ Then I created a little ditty and I played it for the whole family. And it made me really proud.

When did it occur to you that a career as a performing artist was something you might try?

I never wanted to get good at piano. I just wanted to play it, and play my own music. When I turned 26, I thought I’d put a lot of time into it and maybe I [would be] a piano player. That’s when I learned to play boogie woogie from watching Youtube. I was getting into it, and I was at a party at a friend’s house. There was a piano. I never thought I would be that guy who sat down and played. But I did, and it was so much fun.

And I thought, "How can I keep doing this?" It turned out that someone at that party was opening a piano bar in Brooklyn, and a few months later, I got a call. He said, ‘Hey will you play our soft opening?’ I started playing there four nights a week, I quit my job as a waiter, and that really started that journey.

You play a fairly intricate style of music that is often fast with complex syncopation. Does it take a lot of practice to get it right?

I remember the day, all of a sudden, when my right hand could trill freely at any speed I wanted, while my left hand just kept this rhythm. And I thought ‘Oh, my God, they separated!’ It’s muscle memory, that’s the first step.

People talk about the first 10,000 hours gets you to the mountaintop to see the range ahead. Then all of a sudden you can see what lies ahead and it’s an endless, endless mountain range.

Did you inherit any musical talent from your parents?

My mother passed away when I was three years old. She was a visual artist; she played guitar. My dad is a math educator, and math is a different part of the brain. But it’s perfect for piano. My grandmother on my dad’s side always played piano, and my uncles all played piano.

If you hadn’t become a musician, what career path do you think you would have taken?

My friends thought I would be a starving artist. Sometimes I used to joke that, if I lost a hand, I would try stand-up comedy. But I have always loved history. That’s a big part of who I am. In my solo shows, I talk about the growth of barrelhouse blues in the 20’s and 30’s, and how the elements of it connect to other elements. That’s what really has been the driving thing, my love of history and getting answers to questions that I haven’t found.

What is it about barrelhouse blues that captured your imagination?

It’s a music that’s not championed by many -- not many players or music historians. It’s a uniquely African American art form, so talking about it and getting people excited about it is something I really like to do. Because even your average blues fan doesn’t know a lot about it. So adding an education component is something I’m excited about doing.

I’ll be teaching a seminar at the West Coast Ragtime Festival this year in Sacramento where I’m going to just lecture. And I’d like my career to move towards lecture concerts in university settings, where I can tell a story.

What drew you from the east coast to St. Louis?

About four years ago, I bought a one-way ticket to move here. People in New York thought it was very weird. It was in part because the history of this music is what I began to care about. The style that was speaking to me the most was the St. Louis style. I got this book called Devil at the Confluence by Kevin Belford, and it was filled with illustrations and information about the blues and ragtime.

How receptive have St. Louis audiences been to a lesser-known form of blues?

This is a place where people will come out, listen to old piano blues and listen to me talk about it. There are towns where you can make a living as a musician but they are 90% tourists. We don’t have the tourist industry or the coolness factor of New Orleans. What I like about St. Louis is that I have my own little piano festival that I do in June at BB’s [Jazz, Blues and Soups]. I like to put on a show.

You’ve been active as a music preservationist, as well as a performing artist. Any projects on the horizon?

I hope to phase out some of the necessity of being a barroom musician to being a lecturer in universities. My festival work is growing. I’ve broken into ragtime festivals, which for a blues musician is rare. I’ve been to Europe twice a year, so I’m going to have more travel and build a name. I don’t see myself ever leaving St. Louis. I love it here. The living is easy and affordable; it’s a great home base.

You have a pretty busy schedule. Do you still make time to practice?

I’m not a four hour a day practice person, but I like to get an hour or two in. Because what keeps me going is getting better and learning more. So right now I practice ragtime. All I want to do is get better and keep learning.

Your father, Steve Leinwand, is a noted math educator in Connecticut. You took a quite different career path than he did. How has he influenced you?

He’s won all kinds of awards. I haven’t met a math teacher who hasn’t heard of him. He loves what he does. He cares deeply about discovery and getting a good education in math. And he’s so passionate about it. He didn’t get into it to make a lot of money, but he has continually grown in his career. And that’s been very inspiring to me.

You have a physical job and your main tools are your hands. Are there things you won’t do around the house, like working with power tools?

It’s very clear that I don’t use knives. I rarely ever pick up a steak knife. It may be some freak accident that gets me someday, but it won’t be from cutting vegetables. If I get a paper cut, I cry about it. I would never use a mandolin [slicer], and I’m really careful with graters.