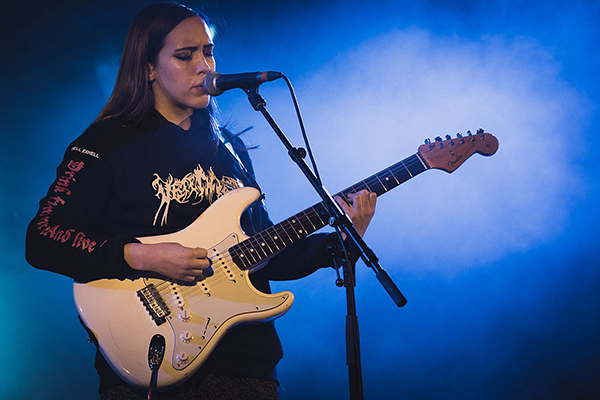 Soccer Mommy is a Teen Dream

Soccer Mommy, the nome de guerre for Nashville singer-songwriter Sophie Allison, rose to prominence along with a wave of similarly young, talented female musicians during the 2018 Year of the Woman. On record, she is alternately brash, referencing Iggy Pop with lyrics like “I don’t want to be your fucking dog,” and insecure, saying of a prototypical mean girl, “I want to be that cool.”

The music on Soccer Mommy’s debut album, ‘Clean,’ is folk-influenced indie rock – equal parts Taylor Swift and Mazzy Star. The melodies are spare and witchy, but the hooks are bright, insistent. By phone, Allison is the embodiment of all these dichotomies: laid-back yet edgy, childlike but worldly, indifferent and completely engaged. She peppers her speech with liberal doses of “like,” “I mean,” and “you know,” in ways that are both charming and familiar to all American teenagers since the 1980’s. In other words, she is the ultimate Millennial woman, the one that the media imagines when they discuss urban revitalization or Alexandria Ocasio-Cortez’s Spotify playlist.

KDHX sat down with Allison earlier this month to discuss her favorite teen movies in advance of her performance at True/False Film Festival on February 28 at 8 pm.

You were born in Switzerland. How old were you when you moved to Nashville?

So you are pretty much a Tennessee native.

How did growing up in the city shape the kind of music you make? It’s not exactly what people associate with the Nashville sound.

SM: Yeah. When I was in high school, I feel like I was around a lot of punk music and garage rock. I think it did send me toward some influences like Sleater-Kinney and Sonic Youth, who I love. But it’s not necessarily the most prominent thing in my music.

But I do think I got some stuff out of, like, the Americana kind of scene. I think that I can sometimes be a little folky with my music. With songs like “Still Clean” or “Wildflowers,” they are the kind of like folk, singer-songwriter type songs that I think is very Nashville.

You occasionally site Taylor Swift as an influence. And in the last question, you talked about Sleater-Kinney and Sonic Youth, bands that have strong female leads or musicians. Is that unique to your generation? Were there more of those influences available?

I think that I just loved a lot of, like, female pop artists when I was a little kid. Because there were a lot of big ones coming out of Disney when I was super young. Hilary Duff and Avril Lavigne and stuff like that was all really big. I mean, I was listening to other things too. But that was the most similar to the kind of stuff I wanted to write.

And then growing up, I think I just started listening to different genres of music. And I think there are so many great female-led bands. It’s easy to be inspired when you’re a woman trying to make music and you see all these bands that have women making music that are amazing.

So do you think that your debut album, ‘Clean,’ will have the same sort of influence on the next generation of female musicians that those earlier artists had on you?

I mean, I hope so. That’s all you can hope, is that your music is influential to people. I hope that it will, you know, stand the test of time. But I can’t say. I have no clue.

If that’s how it works out, what do you want those young women to take out of your music?

I mean, I just want people to be empowered to play music for one thing. But also, I think that having a pop sensibility isn’t a bad thing, especially in indie rock. That’s how some of the best rock songs get made – because they’re catchy and fun.

Do you know that your first cassette is now a collector’s item that goes for a lot of money online?

I do know that.

How do you feel about that?

Um. It’s cool. I don’t get why anyone would pay the amount that I’ve seen on resale sites. Like I would never pay that amount for the the tape. I mean, part of it is kind of stupid. Because, you know, someone’s paying a hundred dollars for this 8-track cassette that was worth eight dollars. So it’s kind of, like, fucked up a little bit. But I guess it means I’m doing well (laughing).

Earlier in the conversation, you referenced artists like Hilary Duff and Avril Lavigne. But you make what most people consider serious indie rock. What is your favorite cheesy pop song, something that might surprise readers?

I feel you (sighing). It’s hard because I love so much pop music. Maybe stuff that people wouldn’t expect that I liked is maybe, like, Drake. I love “Marvin’s Room.” It’s a cheesy pop song. I mean, I love that song. But yeah, that’s a good example.

The songs you write remind me a little of a soundtrack to a teen movie. Would you ever want to put your music on a soundtrack like that?

Yeah, totally. I think that would be super fun.

Do you have any favorites from when you were a kid?

I mean, I love ‘Clueless’ and ‘Mean Girls,’ as basic as that is. I also like 80’s movies, like, Molly Ringwald movies are cool too. I mean, there are so many teen movies that I love. What’s the one that has Amanda Bynes in it? I forget what it’s called. That’s a good one, though, where she goes to London (laughing). There are plenty of teen movies I would love to put my music in.

So, you are playing Coachella this year. Is there anybody that you’re looking forward to seeing while you’re there?

It’s hard. There are so many people playing. I’m trying to remember who the headliners are. I know it was Childish Gambino (laughing). Do you remember who’s headlining?

I think that Janelle Monae is one of the main acts.

Oh, I’d definitely see her. I actually met her in high school. She came to my school and we sang for her. She was really nice and her music is really cool. I also want to see Kacey Musgraves. She’s going to be there, and I love her music. So hopefully I’ll get to see her. Especially since I’ve, you know, toured with her.

And I think that Four Tet is playing, right? I really want to see Four Tet. I’m pretty sure that they’re playing.

Any particular reason why (laughing)?

I love the music so much.

You have very broad tastes.

When you were in college, you went to New York to study music business. What did you want to do with that degree?

It was kind of a backup.

Did you want to run a record label?

And then you started making your own.

And the rest is history.

Alright. Well, thank you so much for sitting down with me.

Of course. You too.