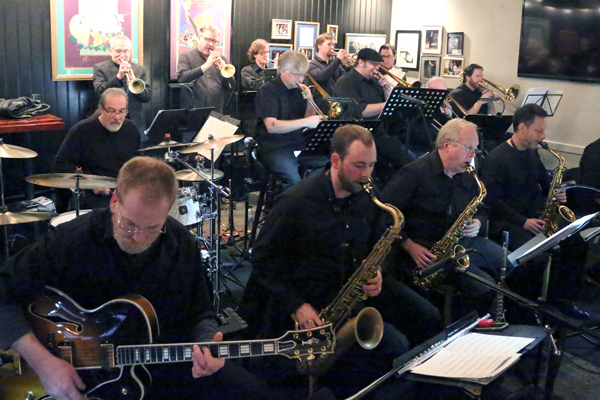 Jazz and New Orleans cuisine go together like shrimp and grits. So the late February performance by the Route 66 Jazz Orchestra at Riverbend & Bar promised a good match. And the orchestra delivered the goods, as it always does. 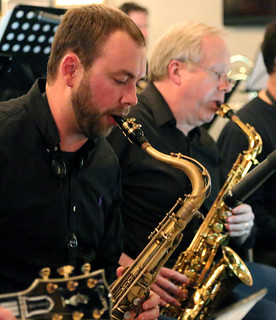 Route 66 plays big band swing and jazz eight times a year, but the nonprofit group rehearses once a week. The band spends a lot of time trying to get the songs just right; hence, the dutiful focus on practice. Their effort pays off, because the band consistently nails challenging arrangements.

They certainly don’t do it for the money, unless you consider a $46 Christmas “bonus” adequate compensation. That’s roughly the amount of the checks the orchestra’s members receive from the orchestra’s director Bob Boedges at year-end.

“It’s to reimburse them for their gas,” Boedges said, laughing. “They give up one night a week to practice, and they need to because this music is so damn difficult.”

On this night in mid-March, the brass section arrived early at rehearsal to work the bugs out of a tough piece called “Check Time” by Don Menza. The orchestra worked from new arrangements of a song that dates back to Buddy Rich and Doc Severinsen.

The Route 66 Jazz Orchestra has 22 members, including Boedges and three vocalists. Most have day jobs unrelated to music, but they all have a passion for jazz. They range in age from 20 to 82. 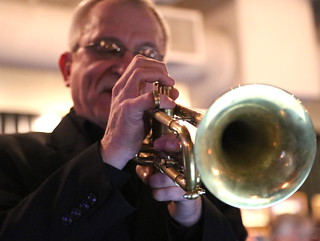 How the band came into being is a story that began in 1969. Dr. Ron Stillwell started a house band at Meramec Community College. It was known as the Meramec Jazz Lab Band and consisted of both students and volunteer members of the community.

In 2012, the St. Louis Community College dropped the band—on very short notice. That meant no pay for the director, no rehearsal space and no access to the college’s music library.

By this time, the band was under the direction of Boedges, who took over from previous director Bob Waggoner in 2005. The band re-formed as an independent not-for-profit organization and has been going strong ever since.

Usually, at the end of a Route 66 Jazz Orchestra show, Boedges thanks the audience for coming and the orchestra for playing. He’ll say: “We do this because we love it and nobody gets paid.” 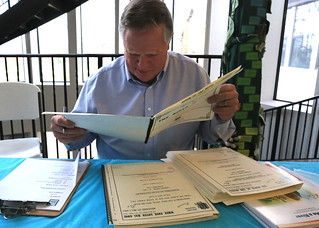 The sentiment is true but it’s a rehearsed shtick. The orchestra members hear these words and feign surprise and disgust, saying “WHAT—no pay!?!?” “We’re not going to play for nothing!!”

But, except for carfare, they do and the St. Louis music scene is richer for it.

The next performance of the Route 66 Jazz Orchestra is at 7:30 p.m. on Wednesday, April 20 at the Marine Corps League located at 5700 Leona Street in St. Louis. The band will wrap up their season with a performance at Jazz at the Bistro in Grand Center on Thursday, June 16.