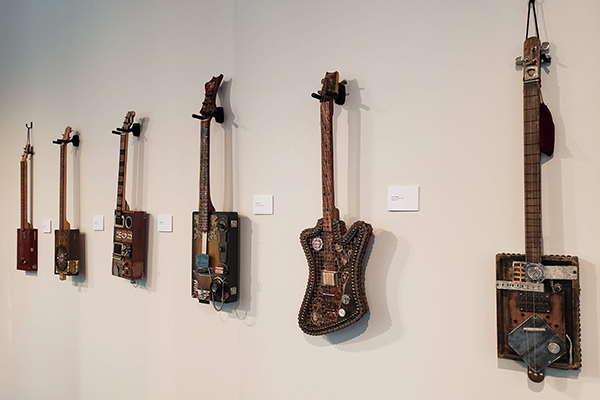 After a Navy career and relocating to his hometown Bob Bowman thought he would finally learn to play electric guitar. In 2016, the Hazelwood Central High School grad bought a Les Paul and went online to learn some riffs from Muddy Waters and Eric Clapton. What he found was Justin Johnson wailing on a three-string post hole digger. That intro to the world of cigar box guitars would result in the current display, Cigar Box Guitars: 21st Century, at the National Blues Museum.

Bowman’s first love always was woodworking, “I always loved to make things, sea chests, cabinetry, humidors … wherever I can use hand cut joinery.” Seeing Johnson’s beautiful handcrafted cigar box guitars “was a revelation,” he said, “I had a reason to get back into my shop.” The decision was serendipitous.

As Bowman began working and trying to source parts locally, his sister-in-law introduced him via FaceBook to her old friend from Hazelwood Central High School, Mike Breedlove. He had a part time business, MGB Guitars (mgbguitars.com), selling cigar box guitar parts. Both were Hazelwood graduates and master woodworkers. A friendship blossomed with Bowman eventually visiting Breedlove’s workshop in Tampa, Florida to build cigar box guitars together.

Breedlove, an engineer by day, first discovered cigar box guitars online a decade ago. It appealed to his woodworker instincts: “When I saw one, I decided to build one. Got the parts, did it and I was amazed that people kind of lost their minds about it. It was the coolest thing I had ever done. They all wanted one, so I made more, and I’ve been doing it ever since.” Breedlove also used his computer to network and build communities of builders.

While the definition of cigar box guitars today has become generic for handcrafted guitars made from many bodies, its roots go back to the cigar trade and poverty. People couldn’t afford to buy finely crafted instruments, so they made their own. Originally, cigars used to come in barrels and had to be put in smaller containers for sale. Those cigar boxes were made of good wood and readily available for guitar bodies.

The same is true today according to Bowman. “Listen to the tonal quality of Spanish cedar and the Honduran hardwood used in these boxes. Look on the back of these boxes. They are made in Honduras, Guatemala, Nicaragua, and some from Cuba. Anything that holds a decent cigar is made from wood. The tonal quality of the wood boxes is great. They make fantastic sounding guitars,” he said.

A year ago, Breedlove’s passion for the artform and having seen an art exhibit in the Tampa airport led him to ask Bowman - “What’s to stop a guy from getting and exhibit at Lambert Airport?” To which Bowman replied, “if you’re gonna ask that type of question, then what’s to stop a guy from getting into the National Blues Museum which is right here in St. Louis?” The game was on.

Bowman, a museum member, called Erin Mahoney the Deputy Director at the NMB and made an irresistible offer. “I told her I had a sponsor that would provide anything they needed and wouldn’t cost anything. We would provide the display units for every type of cigar box guitar from one to six strings including all the hybrids. And, that we would also provide instruments that can be played.” Mahoney was intrigued and enthusiastic. She told them a slot would be available in the fall.

That’s when all of Breedlove’s networking experience paid off. He was in contact with builders across the world and had established his own MBG group of 150 builders. They had been building and sharing instruments with each other. He and Bowman selected 30 builders from the U.S. and one from the Netherlands. They developed 5 - 6 subsets of build categories from traditional cigar box to more elaborate to transitional. Several builders built two, one for the wall and one that patrons can play. Most can be plugged into an amplifier so they can be used onstage. Fifty-eight guitars ended up in the show.

Bowman acknowledges that some MGB members were disappointed at not being selected but they had some tough criteria. “They needed to build a guitar that worked and was visually appealing from each genre. A lot of cigar box builders like to make a basic rustic type guitar with no eye to detail and tolerance or playability and sound. The nuts and bolts guys only care about that it plays and stays in tune. The woodworkers are worried about tolerance, string height all those things you would want for someone to play and be proud of.”

The show at the National Blues Museum offers a fascinating look at the evolution of cigar box guitars. There’s plenty of cigar boxes. Some builders were directed to provide instruments with a more rustic look so they can show the type of instruments Muddy Waters and R. L. Burnside played. Others range from bedpans and license plates to ones like Samantha Fish tours with, an oil can.

The builders group even includes a luthier, Alan Beeber. Bowman understands why. “Luthiers can get frustrated by all the hobbyists playing in their trade. They do this full-time for a living working with the highest standards” he said. “You know it when you see his fat-bottom guitar design with high gloss and all the specs you would want to see in a store-bought guitar.”

There are unique ones, too like Lance Martin’s who is an artist who makes steampunk guitars out of a camera body with a cigar box guitar kit Breedlove makes. He makes some out of 1940s movie reel cans.  Karl Heinzlow built two guitars. One of them is a lens from an old aerial camera. You use the wire coming out to look through and take the shot. Back in those days you did everything by slide rule. So, he did all the measurements by slide rule and then incorporated the slide rule into the build. The camera lens is on the build and you can look through it and see the things he put inside. This completely non-traditional instrument is playable.

Bowman and Breedlove wanted to show these as current instruments that people make and play today. Bowman acknowledges that there are no antiques in this collection because “of their fragile nature and limited supply - the only one’s worth showing are already on display.”  Their goals in curating this show of exceptional builders “is to encourage people build one, play one or find out does and listen to them because it’s a blues roots instrument,” they said. Breedlove’s bucket list goal is “to try and have displays throughout country to tell story of these instruments in every state.”

Cigar Box Guitars: 21st Century will be on display at the National Blues Museum through May 2020 and possibly longer. Check the NBM website for updated hours and information during the COVID-19 pandemic. Plans are underway with the museum and MGB to keep this exhibit available for other venues. Lambert Airport is in the queue.

If you want to learn more about building a cigar box guitar, check out the Cigar Box Guitar Club (hwy61roadhouse.com/cigar-box-guitar-club/) at the Highway 61 Roadhouse in Webster Groves. The Club meets on the 3rd Saturday of every month 9:30. Also, put June 5-6 for the 8th Annual Cigar Box guitar festival at the Roadhouse on your calendar. There will be live entertainment, workshops, guitar and equipment booths. Drop by and say hello to Bob Bowman. 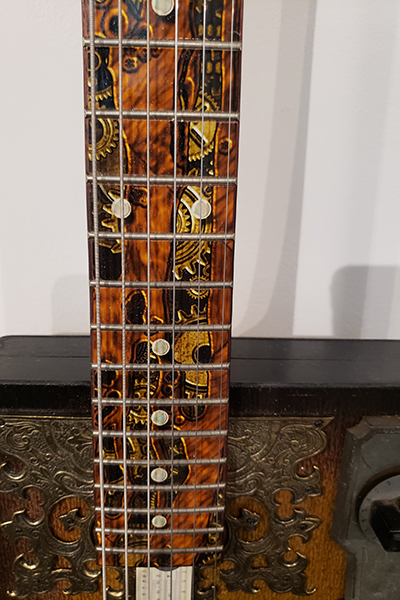 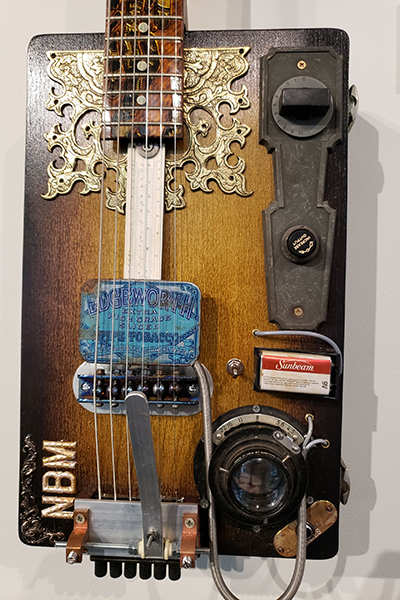 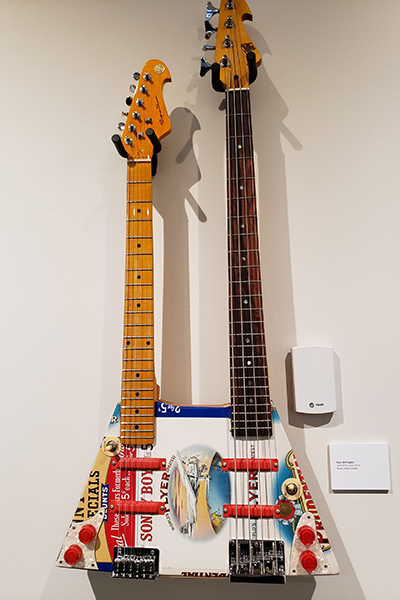 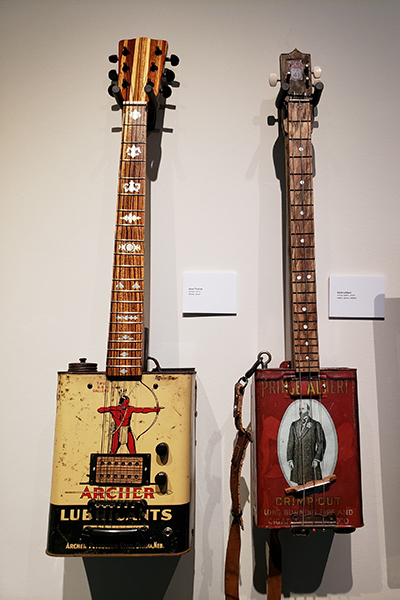 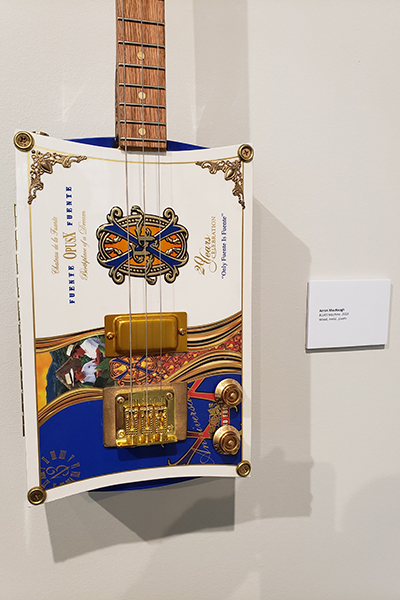 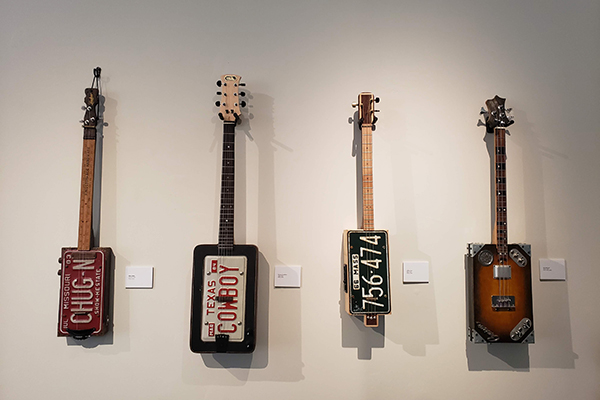 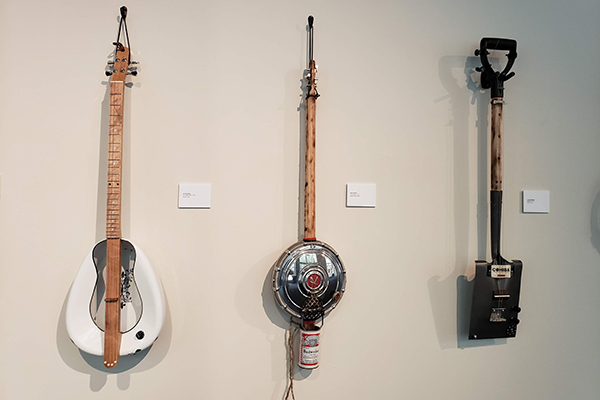 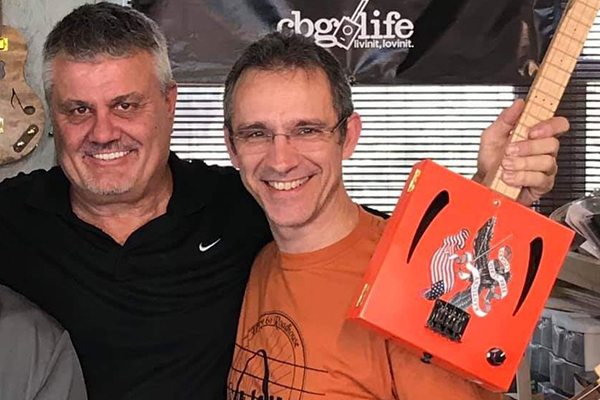