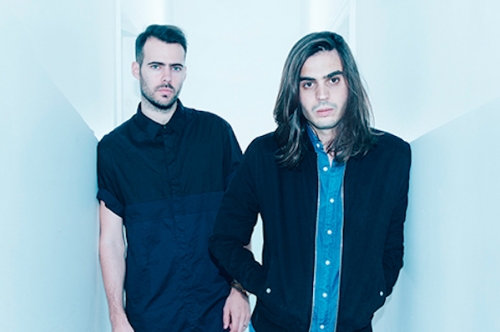 There was a chill on the air Saturday night that neither of us anticipated. As 2720 Cherokee's glass entryway loomed a few paces ahead, we shook out heaps of viscera before we plunged through the door. You see, the days before had coaxed daydreams of Spring beyond our winterized thoughts. This cold felt vulgar, and we were shivering our guts out.

Inside, however, we were greeted with a visions of John Updike's broiled "Brazil." A balmy moisture thickened the air like a spray-on-salve. Beacon's Thomas Mullarney III blasted through the double doors and made eye contact so savage with my mate that he later said he felt like his soul had been witnessed. A small man of Nate Ruess proportions, he moves off stage like an assertive professor late to class, but always on time in his own right. A mere 20 minutes from stage time he sent a bolt of determination through our hazy gaze.

Beacon played twice in STL in the past years opening for an improvisational How To Dress Well and an underwhelming Tycho. After Beacon's deeply sensuous and architecturally proactive backdrops had plunged into my memory bank -- I would sooner forget the idiosyncrasies of Tycho than Beacon's The Ways We Separate pit stop. Beacon bore their native Brooklyn cool on its sleeve as it toured its first record. Swamped in smothered lust, The Ways We Separate (2012) caved in to Mullarney's diaphanous vocals and left space for Jacob Gossett's house music inspired compositions.

Its second effort, Escapements (2016) has been cited by the band as a collage of work. By definition, the album is a collective never fully fused under one aesthetic. The aural palette is so varied its compositions flirt with Le Matos Chronicles of the Wasteland-like discomfort yet can be perked up by throbbing high-hats to slide into 90s dance radio. This translated live to a show that failed to synchronize like its prior stops. That being said, I would have crossed the sea of fools that undulated with the sensations of club drugs on the first floor to find Beacon's second story gallery reprieve any day.

Beacon's second effort's title track plays with bell chords that dribble around Mullarney's rhythmic rambles of a man who turns those who reject him into somnambulists. He sings of people who dance around sleep with the heavy steps of sadness. The bell chords conjure images of "Fantasia" fairies and blend into Gossett's sirens that warn the listener of Mullarney's cold shoulder -- all this translates clearly live into a rebirth of feelings served chilled. It's a track that speaks volumes of Beacon's wheelhouse. With vocals a tad too low in the mix, Mullarney still moaned like a pained mythical beast over Gossett's ambient interpretation of bitterness. It would have been interesting, however, to see Gossett play something other than a drum pad during the songs architecturally stacked frames. If anything, to demonstrate how it is done.

The next day we went to Euclid records and I devoured Le Matos, Tangerine Dream, and Cocteau Twins vinyl on sight. Without question, my hunger for electronic stemmed from the experience we shared with a handful of people, in an attic above a rave with Beacon.