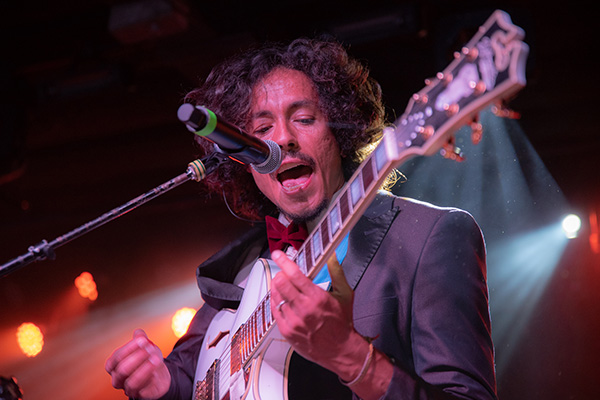 St. Louis was desperate for a taste of summer. Winter had long worn out its welcome, boring us to cabin-fevered tears with dreary 40-degree temps well past the Spring equinox and the usual Groundhog Day prediction. We were yearning for sunny skies and a little warmth, preferably at the same time. A full weekend with highs in the 60s brought the entire city out-of-doors. Dog walkers and barbecues filled the parks, kids scootered around cul-de-sacs and chalked up the sidewalks, shiny new LimeBikes circulated throughout the city and admission lines were out the door at the Botanical Garden. The Zoo? Forget about it.

We all know the beauty of St. Louis in the summertime and music is a vital element in that scene – the festivals, backyard parties, concerts in the park and thumping cars driving around with the windows rolled down.

Concluding the weekend’s teaser of ideal Spring weather, Chicano Batman and opener Amasa Hines brought the music festival vibe indoors, treating Ready Room patrons to a taste of the raucous fun just on the horizon. For starters, there were balloons. At nearly all times in the evening they bounced atop the heads of the sizable Monday night crowd. Some songs elicited a windfall of red and white balloons and even the most defiantly opposed eventually cracked to pop a few back into the air. Second, there were singalongs, with songs we had only just learned the words to. There was rhythmic clapping, not too far off-beat. There was even synchronized arm waving. Essentially, we had all the beloved hallmarks of a festival show, minus the blazing sun, sore feet and body odor.

The scene onstage for Amasa Hines was all linen and Hawaiian, fedoras and ballcaps, batik and print tapestries on the mixing table. Hailing from Little Rock, Amasa Hines provided the festival experience of stumbling upon a gem of a band. In the hands of Joshua Spillyards, the drums suggested indie icons Arcade Fire and TV on the Radio. On the mic, as well, Judson Spillyards conjured Tunde Adebimpe both in posture and gestures, as well as passion. The sum total of keyboards, guitar, bass, and saxophone resulted in an amalgamation of of neo-soul a la Nathaniel Rateliff or Leon Bridges and 80s rock of The Call and The Police. Judson Spillyards spun life affirming yarns phrase by phrase and belted out love anthems in a gravelly bellow. As shy as the band seemed to the spotlight, as overwhelmed as they were with the crowd response – “St. Louis has got a lot of energy tonight!” – they should get used to it. Their grand sound is bound to fill larger spaces as they gain notoriety.

I had wondered how an indoor show would differ from the festival scene where I’ve tended to see them. Rolling Stone magazine recognized Chicano Batman as one of the “15 Best Things We Saw at Coachella 2017’s Weekend Two.” At Lou Fest and Bonnaroo, they delighted the crowd with their unique sunny SoCal Español-affected hippie lounge grooves. But while we basked in their mellow vibes, the band basked in the merciless sun that baked through their powder-blue and ruffled tuxedos, forcing them to hurriedly peel off a layer or two between songs.

At the Ready Room, everyone was able to keep their bowties and jackets from start to finish. With the blazing sun swapped for beaming stage lights, the band seemed extra energetic in this more hospitable environment – spinning, synchronized head banging and occasionally jumping down to connect with folks hanging on the rail. The crowd eagerly obliged lead vocalist Bardo Martinez’s every crowd participation request and chucked the balloons far and wide.

Martinez occasionally traded places with ultra groovy bassist Eduardo Arenas, who serenaded the crowd in faded gold aviators and in Spanish, rolling the heck out of those ‘r’s while drummer Gabriel Villa worked the woodblock and guitarist Carlos Arevalo piled on the wah-wah. On backup mics, two ladies in sequined halter necks danced in unison and shook a tambourine. Vocals and guitars were full of flair – cheeky falsetto and a smile you can hear, glorious reverberation and effects galore. The sound of summery bliss took over the Ready Room.

As our St. Louis music and beer fests start the gears turning, Amasa Hines and Chicano Batman provided the unofficial kickoff to festival season for those of us lucky to be at the Ready Room that night. Here’s hoping they make another pass through the city before the season ends in (what will seem in a few months) a blink of an eye.

Photographer Doug Tull shot the event. Check out the photo gallery over on our KDHX Flickr page. 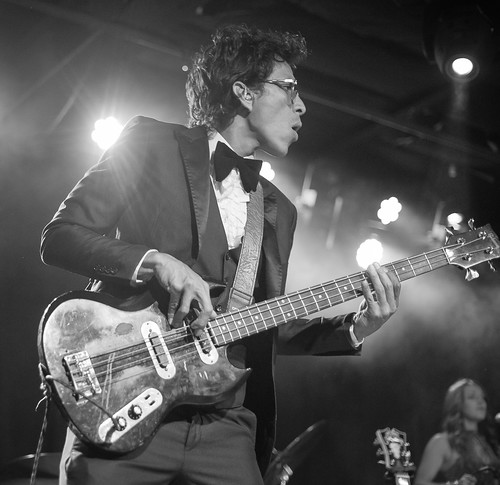