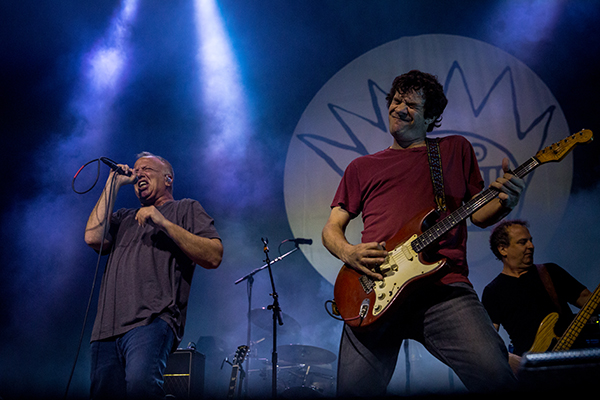 Ween Hits a Home Run at the Pageant

The musical enigma known as Ween returned to St. Louis on Saturday, June 2, 2018. The show at the Pageant was its first in town since 2007 and it began a short run that will also include dates in Kansas City and Colorado.

While this was my first Ween show, I had a good idea of what to expect, both on stage and off. The sights off-stage were just as colorful as the show itself. Like the band's music, Ween fans can be hard to pin down with a handful of adjectives. They are heads and hipsters, bros and weirdos, the common thread being that they revel in Ween's strange, curious, genre-hopping sounds that exist along the edges of popular music. I took note of a moderate amount of tie-dyed clothing, lots of backward baseball caps, more sequins than one might expect, a few capes and a gentleman in full suit tiled with Ween's Boognish logo. Across the diversity of styles, the unifying characterstic of the Ween crowd is an exuberant appreciation of all things "brown" – the term used by the band and its fans to describe something that is twisted and bizarre, but in an interesting and enjoyable way.

Once the lights went down – billed as "An evening with Ween," there was no opener – I expected to witness a set that mixed fan favorites and deep cuts, played and received with zeal. This too, turned out to be an accurate expectation. Ween hit the stage around 8:15 p.m., kicking off the set with three songs from "GodWeenSatan" "Nan," "Tick" and "I Gots a Weasel." This frentic trio of opening tunes was the launching pad for nearly two hours of pinballing sounds.

If you were to ask a random sampling of attendees of Saturday's show to list their highlights, you'd likely hear a collection of entirely unique responses. Such is the nature of Ween's many-colored catalog. So, here are my highlights (since you asked).

Certainly, the Ween songs that I've come to love the most over the years were a joy to see live, including "Buckingham Green," "Roses Are Free," "The Goin' Gets Tough From the Getgo" and "The Mollusk."

There were some less-expected highlights as well. "Frank," from 1991's "The Pod," is a track I would have been hard-pressed to recall if quizzed, but it was an early-set highlight. Letting the mostly-instrumental track spread out, Gene and Dean Ween indulged in their parallel guitar parts, letting them shriek and groan alongside each other. It was one of a handful of moments in the show when the pair was fully enjoying themselves, engrossed in the music.

Later in the set, "Back To Basom," from 2001's "White Pepper," sat in the middle of a trio of downtempo tunes, sandwiched between "Tender Situation" and "The Golden Eel." Like "Frank," it's a tune that I mostly ignored on the record it appears on, but which leapt out in performance. The Pink Floyd-esque ballad ebbed and swirled and pulled me in and seemed to mark a transition in the set, beginning a crescendo toward its closing tunes.

Released on the 2005 compilation "Shinola," the fun and slinky R&B tune "Boys Club" would have been a worthy set closer. Instead, it was one song short of that position ("You Fucked Up" closed). Dean took two swings at his guitar/talk box solo ("...let me try that again...") but rather than coming off as a screw-up, it just added to the fun. And he nailed it the second time.

The show ended with a pair of encores. The response at the end of the first – after the crowd favorite "Buckingham Green" – was more akin to the response after a walk-off home run in the playoffs than what one normally sees at a rock show. With the stage lights illuminating the crowd, a quick gaze around the room saw fans from all corners with arms lifted, voices roaring and faces glowing. The band clearly enjoyed the moment as well. In particular, Gene beamed with his arm raised, taking perhaps a few seconds longer than usual to enjoy the enthusiastic response before exiting the stage. It was another win for Ween and by proxy, for us as well.

- Backstage before the show, Dean was reportedly dejected that he wouldn't be able to get his portrait taken with local celebrity (and Pageant co-owner) Joe Edwards.

- In between songs mid-set, Dean made a point to point out that the band was "trying to channel Miles Davis, Bob Gibson, Albert Pujols and Dizzy Dean."

Setlist (via setlist.fm):
Nan
Tick
I Gots a Weasel
Transdermal Celebration
Object
Pork Roll Egg and Cheese
Frank
The Mollusk
Polka Dot Tail
The Goin' Gets Tough From the Getgo
Happy Colored Marbles
Tender Situation
Back To Basom
The Golden Eeel
Roses Are Free
The HIV Song
Boys Club
You Fucked Up

Encore:
She Fucks Me
The Stallion, Part 1
Buckingham Green 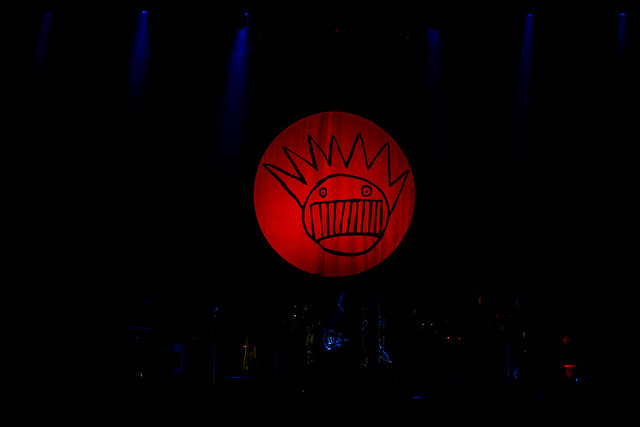 Ween performing at The Pageant, June 2, 2018. Photos by Dustin Winter. Head over to our Flickr page to see the full set of photos from the evening.