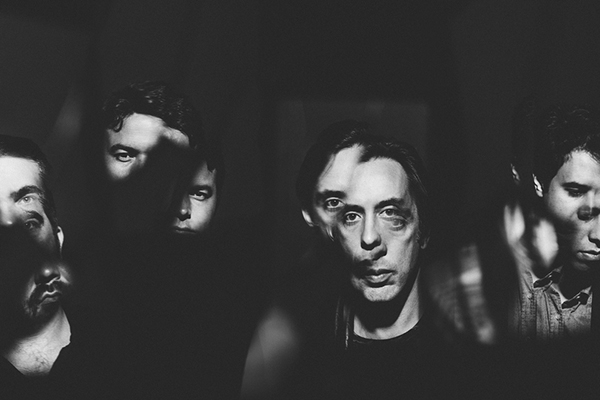 St. Louis heat brings out the best in Wolf Parade

It was one of those hot-like-a-sauna nights in St. Louis. You know the kind: You give up any notions of decency. You give in to the rivulets of hot perspiration dripping down your chest and backs of your legs. You accept the damp pools spreading across your shirt and shorts. No one cares. No one can. I see yours and you see mine, too. Summer in Missouri is no joke, and August 25 at Off Broadway was a perfect example of the best we have to offer a beloved band like Wolf Parade.

Like it or not, we all got a little personal as we bumped sticky arms and plucked our hair from our neighbor’s drippy face. Glancing up at the rafters, I wondered that they didn’t turn on the ceiling fan just above the dance floor. Any air movement would be welcome, you’d think… But a longer look made clear the ancient clumps of dusty fur dangling by a thread from the fan blades, just waiting for a draft to cut loose and drift down to your sweaty face. It seemed the still and saturated air was actually the better option.

The steam bath effect was not lost on the band, either. Dressed in nondescript black and looking the part of Javier Bardem’s Anton Chigurh, guitarist Dan Boeckner made no attempt to adjust his sweat-soaked mop, strings of fringe plastered down his forehead and dripping into his eyes. He apologized to all those within a few-feet radius for the unintended sweat shower he rained upon them, but it didn’t stop him from convulsing with irrepressible emotion as he churned away, doubled over.

But for all its discomforts, there is plenty of virtue in a tightly packed, barely air-conditioned club. In a lot of ways, it enhances the show. Case in point – I recently had the opportunity to take in my first ever show at Red Rocks, which, of course, was an incredible, breathtaking venue. But when I told a co-worker of my adventure, joining a good friend at the glorious amphitheater to see her favorite band, Old Crow Medicine Show, he was a bit disappointed for me. “They really need a more intimate, sweaty club to get the full experience.”

Now, I’d never seen Wolf Parade before, but they seemed to thrive in the sweat-sharing proximity to the crowd and the love radiating from the audience. An old friend we ran into eagerly declared Wolf Parade his “favorite band in the world” and was stoked to finally see them live. Along with an audience full of fellow diehard revelers, he punctuated all the grandest lines of the band’s anthems with arm waving, air punching, finger pointing, and called every song title about five notes in. “Fancy Claps! Oh my God ‘Dreaming!’... This is ‘Beehive!’” In fact, I don’t know that many people in the audience had seen Wolf Parade before. The last time they came through was 2010, and seeing them at The Pageant must’ve been a very different experience.

Personally, I’m new to the Wolf Parade scene. I came upon the band by way of Boeckner’s newest project, Operators. Boeckner and keyboardist Spencer Krug take turns at vocals, and their styles are distinct. Following the Operators trail back to the band only emphasizes the distinction, with Krug issuing a sort of choked-up declaration of indie rock, at times bordering a yodel, while Boeckner strikes a lower, incredulous surrender of brooding new wave rhythms. The whole package maintains the epic tradition of other Canadian outfits like Arcade Fire with a touch of TV on the Radio futurism in Boecker’s vocals and a trace of Beck’s folksier side in Krug’s.

The band seemed genuinely pleased and constantly surprised at the crowd’s overjoyed response. Each song ended with “Wow!,” a beaming smile, or a “You guys are great!” It was enough to keep bassist Dante DeCaro swaying rhythmically like an antsy child onstage in a school pageant, despite the steamy heat radiating from the stage lights. And drummer Arlen Thompson marched along, seemingly cool as a cucumber, giving no indication of how he suffered until leaving the stage, the bulk of his denim shirt a few shades darker and damper than when he started.

We can’t take it personally that there’s been no Wolf Parade in our fair city for so many years. They took a few years’ hiatus and they’re prolific musicians with multiple other projects apiece. And after such an intense and earnest performance, you bet I will be checking out each and every one!

We can, however, take it personally that they so enjoyed their evening. It seems the swampy St. Louis summer brings out the best in us all.