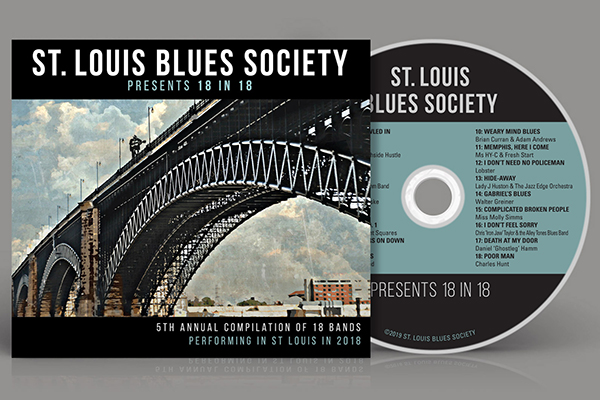 If you’re looking for some great St. Louis music to start the spring, the St. Louis Blues Society’s latest release, ‘18 In 18,’ is what you need. In producing the fourth installment of the Blues Society series, Paul Niehaus IV has delivered a tasty mix of tunes that he and chairperson Jeremy Segel-Moss describe as, “the most stylistically diverse album we’ve had so far.” And possibly the most complex one to date.

While each volume in the series has showcased the breadth of the local music scene, the previous recordings were slightly more narrow in their themes. For example, ‘17 In 17’ had a soul emphasis, while previous years have been more Delta or electric blues focused. Segel-Moss says he’s excited about ‘18 In 18’ because “it’s a testament to the variety of blues and soul in St. Louis today – from Walter Greiner’s bluesy American folk style to Lady J’s full orchestra.” Niehaus agrees: “From old-time, traditional, pre-War blues to the cutting edge of contemporary St. Louis blues, it’s all represented.”

Working from the comfort of his wood-paneled, South City basement studio, Blue Lotus Recordings, Niehaus assembled the various elements of the project. “It’s like putting a puzzle together,” he says. “We identify the artists, schedule studio time, do the recordings, engineer the music and put it in a good running order that takes the listener on a journey from the first track to the last.” But each song is a puzzle too. The studio work can vary widely from the five solo or duo songs on the album to Al Holliday’s ten-piece East Side Rhythm Band and Lady J Huston’s collaboration with the Jazz Edge Orchestra.

Lady J’s song, “Hide-Away,” was the most complicated recording challenge Niehaus has faced to date. When the artist showed up with sheet music and the Jazz Orchestra, with its five-piece rhythm section, four trumpets, two alto saxophones, two tenor saxophones, one baritone saxophone and four trombones, including a bass trombone, he was ready. It took a five-hour session to record each section, plus Lady J’s vocals and a trumpet solo. The arrangement is an intricate mix of styles and tempos. “The foundation is a blues ballad that expands the standard blues chord progressions,” Lady J explains, “and mixes in some jazz elements like Duke Ellington and Count Basie and some up-beat funk.”

Lady J fits with Segal-Moss’s intent to have “everyone find someone or something on the [album] they have never heard before.” Huston is a native St. Louisan who played trumpet and served as music director for Albert King (1980-82) until she accepted a music scholarship to Howard University. Life and work took her to Las Vegas for 25 years, where she won awards for Best Blues Band and Best Blues Performer and was heralded “The Las Vegas Queen of the Blues” until a debilitating illness brought her back home in 2013. It wasn’t until mid-2018 that she was able to return to the stage.

Like its predecessors, ‘18 In 18’ is all about introducing St. Louis music to the world and the city to itself. Over the course of four volumes, the series has compiled 66 original songs by local artists. One more installment will bring the Blues Society to a boxed set status. Niehaus is just grateful to be part of the project: “My ear for engineering and production has improved over the last four years, thanks in large part to the experience these albums have given me.” In the end, ‘18 in 18’ is quite the St. Louis blues journey. It is one that impresses the listener and makes them want to hear more from each of these talented artists.

Here is the tracklist and some of the artists' thoughts about their songs:

Little Dylan / "The Dog That Crawled In"

It’s a straight up blues song. I wanted to be on ‘18 In 18’ to be able to do something of my own and show that I can not only execute music at the best level but write my own music as well.

Torrey Casey and the South Side Hustle / "Old St. Lou"

This is an anthem and a tribute to our wonderful city. It’s a traditional blues shuffle on the beat. It is a song that anyone and everyone can sing.

I sat down to write a new song and this one just fell out. The story line is: "Man falls in love; girl leaves town; he would walk holes in his shoes just to hear her voice again." It’s an acoustic piano / guitar blues style.

It’s about having a relationship with someone that uses your name like it’s a curse word. The style is simple, straight forward and inspired by the kind of song Ray Charles would have cut. The beat was taken from a tasty New Orleans R&B record. We cut it live as a group.

I play because it’s what’s inside of me. I’m a songwriter. That’s what I do. My whole life is a trigger for every song I write. It’s a solo on my 1937 National-style resonator guitar. It’s blues, old style country, the type I learned from old blues guys.

It’s a little about all the reasons why someone might feel like their voice doesn’t count. It does end on a positive note. I wanted to share that with anyone out there who might be feeling the same way. This song is a little between blues and jazz.

This is an instrumental done in a New Orleans jazz / blues style with a standard blues 12 bar progression. We were happy to have the Gaslight Squares involved with the St. Louis Blues Society.

Sharon 'Bear' Foehner / “Call the Ancestors On Down”

This is a song about calling / praying to our ancestors to get their wisdom and strength, to get their positive and negative energy and spirit. It is a gospel style solo with my guitar.

The song is about not being able to dance and finally getting the chance. We wrote it because we are always hearing our crowd talk about it. It’s a funk / blues number. We did it for ‘18 In 18’ to give everyone a new song to dance to.

The song is about my use or you could say abuse of alcohol to help cope with the stress and anxiety that sometimes goes along with the music business. The style is primarily inspired by Big Bill Broonzy and Lonnie Johnson recordings. It’s truly an honor and a privilege to help showcase what STL has to offer.

I wrote this after I entered the regional IBC competition. I think it helped me to win. I have always been a big fan of Koko Taylor. This is the type of song she would sing.  It is a Delta shuffle.

Lobster / “I Don’t Need No Policeman”

The title tells you the story. It’s a straight up blues number that I wrote a while ago. I was glad to do it for the Blues society. I did it with Chris “Iron Jaw” Taylor on harmonica.

My song, “Hide-Away,” is about moving on with life in another location after the end of a love affair.  There are multiple styles of music in this song with the foundation being a blues ballad.  The Jazz Edge Orchestra put their time and talents into this project gratis in support of the St. Louis Blues Society.

The song is about KDHX DJ Gabriel’s passing. It’s an old school American church-style song with a twist. It presented itself to me while I was playing. It just came. I loved Gabriel. It’s in dedication to the man.

As a songwriter I find inspiration in everyday life. This is a realistic love song born out of an overheard conversation: “We're just complicated, broken people doing the best we can."  The style is Americana soul. Being on this compilation is a cool thing – it’s camaraderie with the other musicians and promoting Saint Louis music.

This is a low-down, dirty blues song about repeat offenders on drugs that you repeatedly try to help. The blues has always been part of my life and my consciousness.  Being part of ‘18 in 18’ and the St. Louis Blues Society is an honor.

I wrote this song about the struggles with alcoholism and deciding to seek treatment. My style of music for this song is influenced by the North Mississippi hill country. I appreciate the encouragement I received from Paul Niehaus and other musical teachers to be part of this.

It’s a story that tells you that even if you aren’t rich with a lot of money, it ain’t always bad being poor. This is blues done in a B.B. and Albert King style. When I do my next CD with the Ground Floor Band, this will be on it.