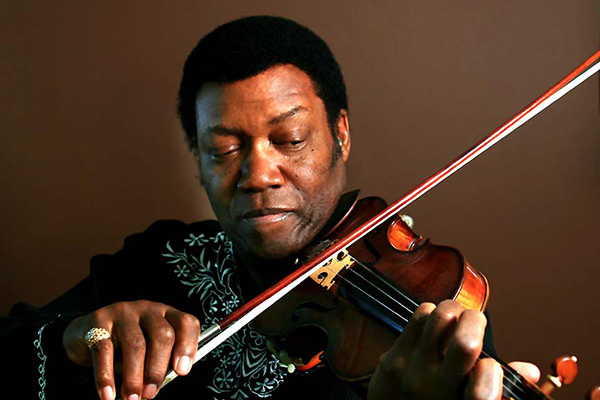 Throughout his distinguished career, the music of concert violinist Darwyn Apple has rung from concert halls throughout Europe and the United States, but St. Louis, his home base, has been particularly blessed to host many of Darwyn's greatest performances. To celebrate his tenure here, Darwyn has recently assembled two of his most memorable recitals on CD, eponymously titled "Darwyn Apple." The double album includes a recital held at Christ Church Cathedral in downtown St. Louis in 1980, as well as a recital held at Trinity Episcopal in the Central West End in 1981.

Darwyn's hallmarks include not only a bold and definitive tone, but an unswerving attention to detail and phrasing. Notably, the repertoire on the two discs spans the Classical period to the present, including the Mozart Sonatas in B-flat Major, K. 454 and A Major, K. 256; the Beethoven Kreutzer Sonata; the Brahms Sonata in D Minor and the Gabriel Faure Sonata Opus 108, as well as the Rachmaninov "Vocalise" and "Jes Grew" by 20th century Nigerian-Jamaican composer Noel da Costa.

One of Darwyn's foremost gifts is his keen sense of collaboration. For these recitals he was joined by renowned St. Louis composer and concert pianist Robert Ray. The unity of purpose and execution between the two performers almost gives the impression that we are hearing a single grand instrument. Even in the the most intricate virtuoso passages, the fingers fly together on both instruments. Like Mr. Apple, Robert Ray brings to bear a keen sense of phrasing that enlivens the soul of the music and brings the composers' intentions to life. The Kreutzer Sonata is a particularly fine example of the tight collaboration between the two. The echoed passages, dynamic contrasts and twisting phrases bring the very essence of Beethoven's sense of drama, humor and tenderness to a palpable level. The crystalline accuracy of execution in these live performances is unfailing even under the pressure of appearing onstage before a large audience.

Although the performances featured on the two CDs are taken from live performances, the engineering is strong and clear. Balance between the two performers is excellent, permitting both instruments to shine. Sufficient applause is included to add a touch of verve and excitement to the recording but not so much as to distract the listener. With just a click, the listener can feel transported to the original live performances.

In addition to his work as a solo and ensemble performer, throughout his career Darwyn has been a devoted educator and historian of the iconic significance of the violin within the African-American community. He has been a frequent guest on St. Louis and national radio programs and in newspapers, and has shared insights on a PBS documentary with jazz violinist Regina Carter. As a tireless speaker before groups of students of all ages, Darwyn has made an invaluable contribution to the nurturance of a vast cultural legacy to be cherished by all.

For additional information concerning this and other CDs and performances by Darwyn Apple, visit darwyn-apple.com and Facebook.