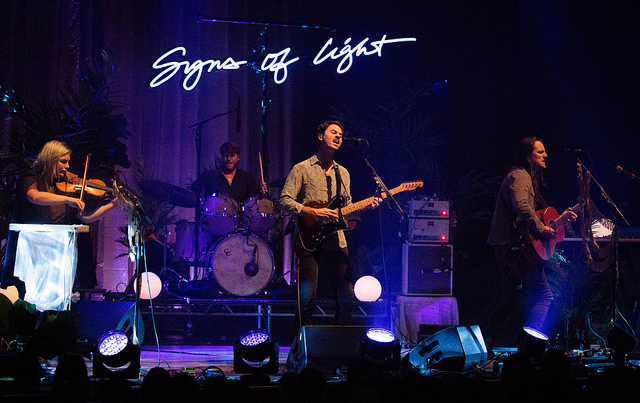 The Head and the Heart renew the road on stage at the Pageant, October 3

For a sold out, plaid-clad, faintly redolent of weed crowd last Monday night the answer was, "La la la la la la," punctuated by exuberant hand claps. Opening with "All We Ever Knew" from the new album Signs of Light, The Head & the Heart had the Pageant audience on their feet and signing along from the jump. Jon Russell -- now foisted into the position of front man -- told that audience that after a two-year absence from the road, "We're remembering how to play music for people who like music."

Under a neon sign emblazoned with the title of their new album, the band follow a pair of tracks from that release with "Ghosts," a chestnut from their self-titled debut. Keeping banter to a minimum, The Head and the Heart continued on into material from their sophomore album, Let's Be Still, with their live rendition of "Shake" elevating the audience's hand-clapping to a frenzy. Early in the set The Head and the Heart showed signs of rustiness (including breaks between songs that yawned a bit too long), but the unbridled adoration of the crowd smoothed over the rough patch.

Near the middle of the set, Jon Russell introduced "the newest, most talented member of the band," Matt Gervais. It was long-time member Charity Rose Thielen (Gervais's spouse), however, that stole the show, eliciting the loudest cheers with her vocal and violin solos. The group closed out the first set with a rousing rendition of "Down in the Valley," and -- following a minutes-long standing ovation -- returned to the stage to perform a trio of previously unreleased tracks. The final song of the evening "Rivers and Roads," showcased the newly minted The Head and the Heart line-up at their harmonic best.

Opening band Hurray for the Riff Raff, fronted by dynamo Alynda Lee Segarra, treated the audience to rocking renditions of "End of the Line" and "Look Out Mama." Teasing a new album due out in March, Segarra debuted the new songs "Life to Save," "Nothing Gonna Change that Girl," "Rican Beach," and "Living in the City."

To see more photos of the performances by The Head and the Heart and Hurray for the Riff Raff click below. For the night's setlist, scroll to the bottom of the page. 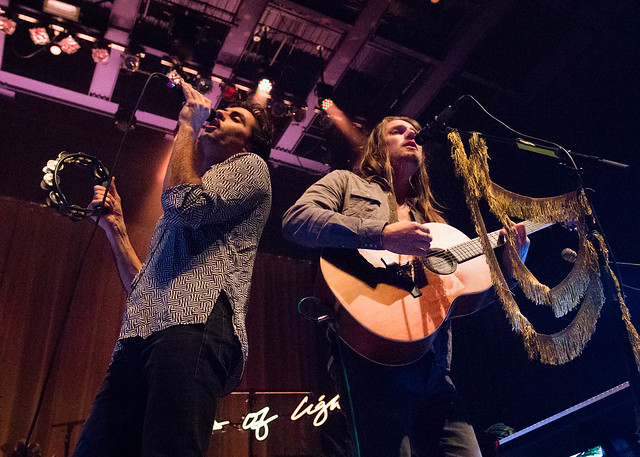 "All We Ever Knew"
"City of Angels"
"Ghosts"
"Another Story"
"Shake"
"Rhythm & Blues"
"Library Magic"
"Let's Be Still"
"Lost In My Mind"
"Colors"
"Winter Song"
"Sounds Like Hallelujah"
"I Don't Mind"
"Down in the Valley"
Encore Break, followed by a trio of unreleased songs
"Rivers and Roads"