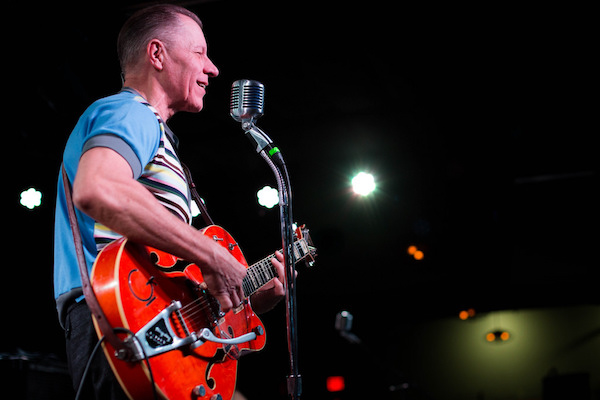 The Reverend Horton Heat in top form at the Ready Room

The Reverend Horton Heat, a trio from Dallas, walks the line between several generally unrelated genres including country, punk, rockabilly, surf and swing. They're self-described "country-fed punkabilly," which may sound a little confusing, but the moment they hit the stage and start playing it all makes sense. A big red hollow-body electric guitar, upright bass, plenty of Texas twang and humorous and sometimes raunchy lyrics about ex-wives, cars and cocaine. Whatever you want to call it, it's always upbeat and an undeniably good time.

The show was opened up by rockabilly duo, Flat Duo Jets, followed by Agent Orange. The crowd was as diverse as the aforementioned genres that encapsulate The Reverend's sound. There were women dressed in pinup-girl fashion with high-wasted pants and hair in victory rolls. I saw one woman who appeared to be in her eighties sporting a REV t-shirt. And Agent Orange, a Southern California band known for loud, anti-mainstream punk rock, attracted a group of young adults that made themselves known amongst the rest of us when they started a mosh pit the second the first chord was played.

Lead singer, Jim Heath (The Rev) looks like a mix of James Hetfield and Gunnery Sgt. Hartman and is dressed in a 1950s style short-sleeve sweater and pleated trousers cuffed at the bottom. He has a million dollar smile and despite the occasional punk-rock style screaming he seems like a sweetheart. He called attention to one man in the audience by pointing out, "You're the only man here that did the 'cha cha cha' at the end of that last song and I would like to buy you a drink." He has a youthful energy that helps him fit perfectly into the eternally-teenage punk scene. While playing a really sweet riff the Reverend steps away from the microphone, moves to the edge of the stage and gazes out over the crowd with an intimidating grimace. Then just a beat later he breaks character and flashes the warmest smile you've ever seen.

Jimbo got the crowd to start clapping with an undeniable rockabilly tempo inducing involuntary 'stomp clap stomp clap stomp clap' and the boys played the title track from their last studio album, "Smell of Gasoline." Several covers were played as well including Johnny Cash's "Folsom Prison Blues" and Chuck Berry's "Little Queenie." The Rev told a story about a friend he recently lost that would not approve of him playing the next song. He had tried to play this song with Lemmy Kilmister in the past and Lemmy would say, "No, I won't do it." The Rev explained to him that he's just giving the people what they want and Lemmy replied by yelling, "NEVER GIVE THEM WHAT THEY WANT!" The crowd went wild and the boys obliged, they are an affable crew, by playing Motörhead's "Ace of Spades."

Click the image below to see all of Monica's photos of the evening's line-up. 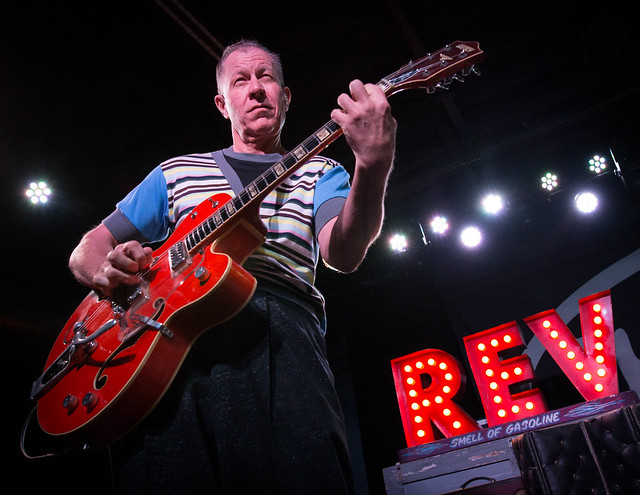