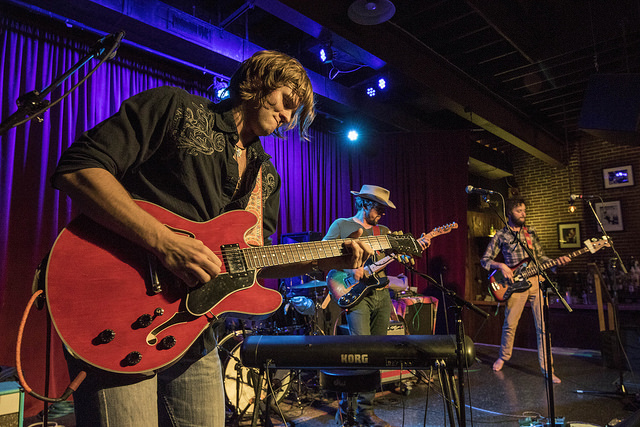 The Black Lillies: New and yet still true

The Black Lillies represent. There is no mixed message or pretense, though their moniker is an apt metaphor for their sound. Cruz Contreras, the front man and writer, moved with a quiet confidence even before the show. The band took the stage at Off Broadway and waited for Cruz to open the set. Sam Quinn, formerly of The Everybodyfields, leaned back on his bare heels and closes his hand around the neck of his bass. Cruz strode across the stage in boots, the click of each step echoing throughout the room. His grey-tipped curls poured like a halo beneath his hat. You would almost expect him to have a pistol on his hip.

Then they began. The drums, played by Bowman Townsend, came in heavy and the guitar hit the down beat slightly flanged, echoing the forward country swagger of Waylon Jennings in the late '70s. The band was energetic and never rowdy, even though at one point Cruz assured a vocal spectator that she could "cuss in here." Though the venue could have held many more people, the band played as though they either didn't notice or didn't care. Either way it didn't matter. The music mattered.

The line-up was smaller than usual, though the sound did not feel compromised. Dustin Schafer with quick licks and extended solos replaced the high mercury sound of the steel guitar found on their records. Cruz sang both parts of the songs usually performed with a female vocalist. This was a return to how he had written them, he confided after the show. And though he does miss a duet partner, he enjoys the dynamic of this all male four-piece.

Heralding the cradle of country music from which they sojourn, their songs are heavy with roots overtones and the glee of Eastern Tennessee country which borders on bluegrass at times and finds it silly to argue the difference. Four songs in, Cruz switched to an electric and the band opened into a stretch of faster beats which varied from rock, aided by Schafer's shredding, to a strong honky-tonk two-step.

They played a few of the fan favorites such as "The Fall" and "Whiskey Angel," though Cruz introduced many songs as new and yet to be recorded. The newer material is heavy with metaphor, reaching for imagery beyond traditional exegesis and with more vehemence than The Black Lillies' earlier work. It also relies heavily on the hook, often repeating it as the song fades. For these newer works, Cruz picked back up his sunburst 1952 Gibson J45 with his angular strumming pattern worn into the wood like a battle stripe. It is obvious this guitar is his songwriting standard, and his voice, always melodious and never overdone, fits well within its soft range.

They closed the night without an encore, but stepped directly into the crowd to mingle those still milling about. Excited for their new record, the band sees this tour as a method for perfecting these songs before they return to the studio. Cruz' songwriting is strong, if not as proudly confident as it was in the early records. Now it emerges with more technicality -- and more hope. They are indeed The Black Lillies -- with all the delicate grace of a blooming lily, but a blackened one, mature with worldliness and a price duly paid. And I, for one, look forward to the upcoming release.

Click the image below to see all of Tim Farmer's photos of the evening's performances. 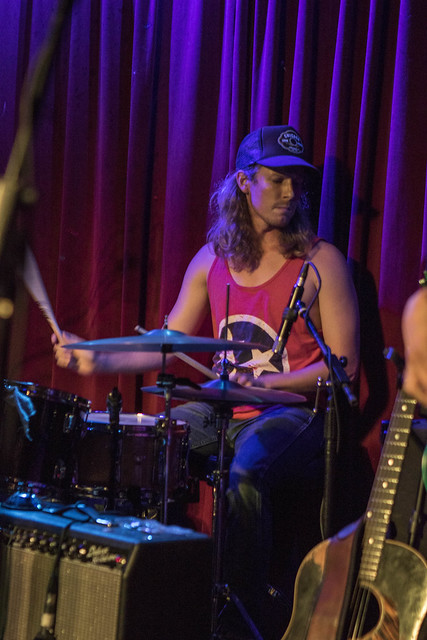