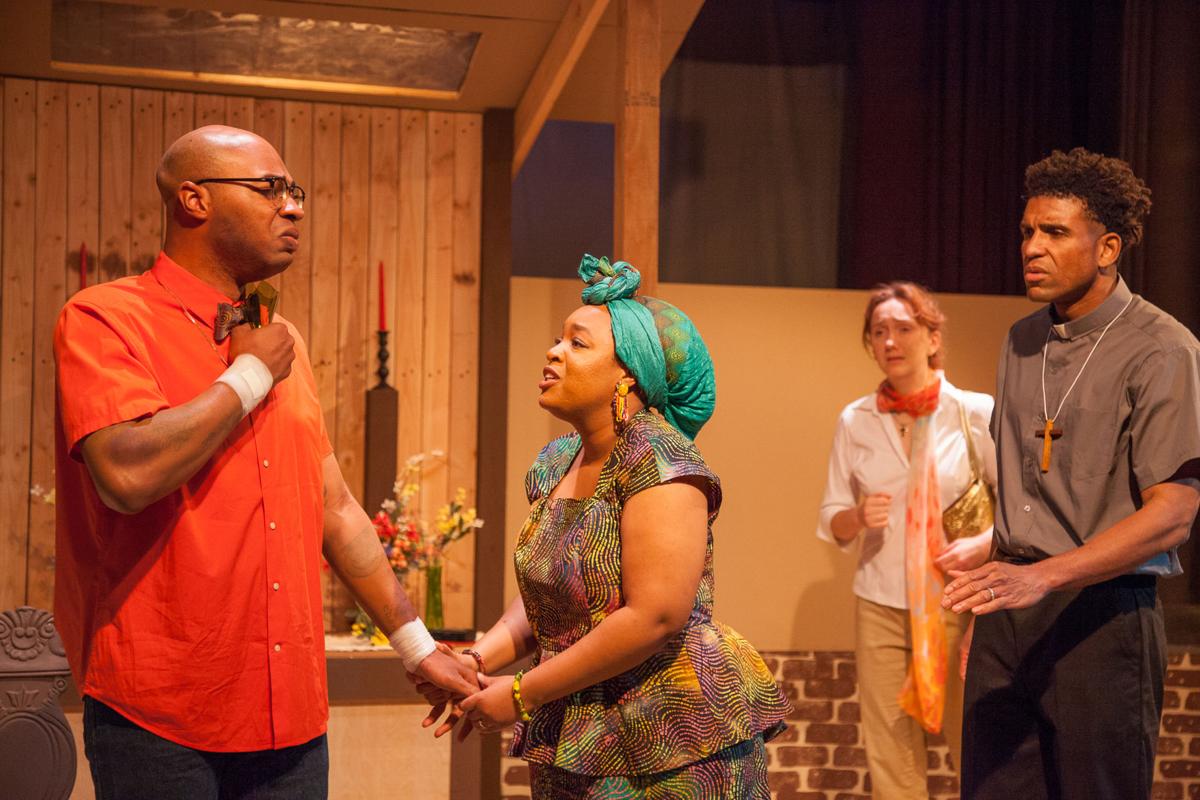 ‘Cardboard Piano’ is a touching, densely layered story about love, war and loss

West End Players’ Guild closes its 107th season with a heartfelt and heartbreaking production of Hansol Jung’s “Cardboard Piano.” The deeply moving if occasionally slow-paced production explores love, acceptance and forgiveness against a backdrop teeming with the unconscionable atrocities of war. Without becoming overtly heavy-handed or moralizing, the two-act show considers how individuals respond to questions of love and faith during times of unrelenting conflict, when it is difficult to know whom one can trust with their secrets. A second, equally powerful, storyline reminds us of the cruelties of war and how they are most often visited upon the young and vulnerable.

It is New Year’s Eve on the cusp of the year 2000, and two young women -- Adiel a black native of Uganda and Christina, also called Chris, a white teenaged daughter of missionaries from the United States -- are secretly celebrating their love in a small village church in war torn Uganda. The happiness they share is genuine, but marred by the realities of war, disapproval of their relationship and the fact that Chris’s parents are planning to flee the country with their daughter.

In a bid to stay together, Chris convinces Adiel that the two of them must flee the country, though Adiel will not go before returning home to assure her family that she is leaving and has not been taken by the soldiers. As she prepares to leave the church, Pika, a thirteen year-old boy kidnapped and turned soldier, crashes into their private party and it soon becomes apparent he is gravely injured.

Though fearful, the women hesitantly provide first aid to Pika, who is as frightened of his commanding officer as he is the enemy and much too young to fully comprehend the nuances of war. He grieves for the crimes he has already committed, and then reflexively snaps into action when a threat triggers his brutal but well-conditioned response. Moments of joy and pain, redemption and violence coexist in the volatile country, and these conflicts continue unabated from the show’s opening through the final curtain.

The tension and emotion builds slowly but steadily throughout the production, directed by Linda Kennedy. The characters are clearly realized and distinct, if at times too guarded and limited in their emotions. Interestingly, the second act is considerably more powerful and affecting than the first; though it unfolds with less violence several characters are still torn apart.

Frankie Ferrari and Jazmine Wade are two of our town’s most quietly expressive actors, and their ability to say much through slight movements or changes in expression lends credence to their performances. Though tempered by youth and circumstance, their affection is clear, if muted, during the first act and their compassion apparent in the second act, when Wade shifts from Adiel to take on the character of Ruth. While Ferrari does an admirable job of varying how she expresses her feelings, I wonder if the pensive character needs to be so consistently dour and wish she could have just one bright moment, but perhaps that is simply a sympathetic reaction to the weighty character. Wade is soft-spoken, but resolute in both her roles, displaying wisdom and an appreciation for small blessings that Chris seems incapable of feeling.

Darrious Varner turns in his most fully realized performance to date as young Pika, then tops that in the second act as Adiel’s cousin Francis. Though considerably older than the young soldier, Varner hits just the right note of youthful uncertainty, wide-eyed wonder and fear to enable suspension of disbelief. Finally, Reginald Pierre, as the soldier looking for Pika in the first act and Paul in the second, brings a commanding presence, nuance and levels of turmoil that add resonance to the play. There’s a sense of desperation and deep regret in his character that’s revealed long before its cause is clear, and Pierre expertly mines this conflict in a quietly impressive performance.

Kennedy’s overall direction is clear and purposeful, though I longed for more emotional levels at times and the first act, absolutely necessary to the drama’s exposition and resolution, may benefit from a heightened sense of urgency. Additionally, the actors do not seem comfortable with the blocked fight choreography, causing it to slow down and look as staged as it is. Michael Monsey’s staging makes sense, but more practice is needed to sell the struggles in the context of the show.

The set, the interior of a humble missionary church designed by Renee Sevier-Monsey, creates the right environment for the show, but there are several important moments that some members of the audience miss due to blocking. "Cardboard Piano," continuing through April 15 at the West End Players Guild, is powerful and affecting, but many of the scenes are completely unviewable as currently configured. I encourage adjustment, perhaps by shifting or removing seats, to counter the architectural constraints of the theater space. The Guild has created a lovely production of a poignant, personally intimate play and every scene is worth watching.