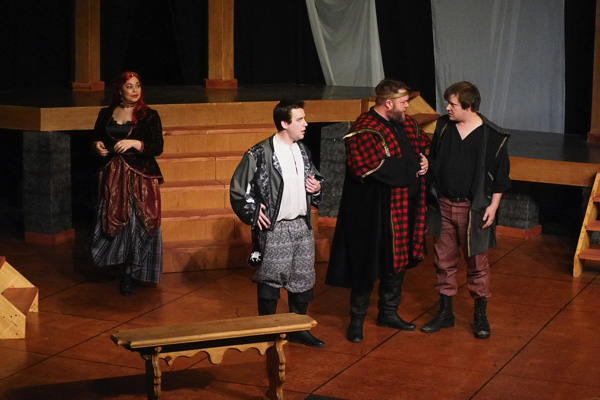 Rosencrantz and Guildenstern Are Dead, But They're Lively Until Then

Tom Stoppard is an excellent playwright, probably the closest successor to George Bernard Shaw that we have today, with comic sensibility and sensitivity, and his broad interest in the human comedy.

That interest might not have been as broad – or as deep – in an early play like “Rosencrantz and Gildenstern Are Dead.” But a questing intelligence infuses almost every moment.

Some of it is intelligence about Shakespeare's play “Hamlet.” Stoppard knows it well enough that he can go behind Shakespeare to show us what was going on elsewhere in the palace at Elsinor. These mostly have to do with Rosencrantz and Guildenstern, two medieval dudes, schoolmates of Prince Hamlet, summoned from campus back to Denmark to see if they can pry out of Hamlet what's making him act so strange.

They don't do it well at it. Or at much of anything. In the original play, they often wind up as the butt of a little comedy that Shakespeare injects into this tragedy. In Stoppard, we first meet them being made the butt of a prank played on them by the law of probability in a coin-tossing contest. This makes Guildenstern, the brighter of the two, ponder on such matters as probability and fate. Rosencrantz, the dimmer bulb, keeps winning, so he feels no need to probe the cosmic significance of his good fortune.

So it continues as they move through the royal court to a ship at sea and their destiny, more casual slaughters.

Robert Thibaut is delightfully clueless as Rosencrantz. Ted Drury's Guldenstern keeps probing, often with language and thoughts echoing an Irish writer several centuries in the future as he plays Didi to Rosencrantz's Gogo while they wait for Godot. Or Hamlet, in their case, nicely done by Scott McDonald, with Eileen Engel as a very expressive Ophelia, Nicholas Kelly an authoritative King Claudius, Wendy Renee Greenwood his gracious queen, and Dan McGee eagerly fumbling about as Polonius. R & G get to spend more time with the visiting company of players than with the nobility. Joe Garner, Megan Wiegert, Cliff Turner, Michael Pierce, and Genevieve Colllins ably represent this company, led with grand extravagance by Isaiah Di Lorenzo.

Chuck Winning's ingenious set, lighted by Kevin Bowman, convincingly serves as both palace and ship and gives director Suki Peters ample interesting areas to play with. I did fail to get the point of the period and style mixture in Meredith LaBounty's costumes. Ted Drury designed the sound and Katie Robinson the props.  “Rosencrantz and Guildenstern Are Dead” briskly combines its laughs and deep thoughts at St. Louis Shakespeare through April 15th. Check the web site at www.stlshakespeare.org for tickets and information.