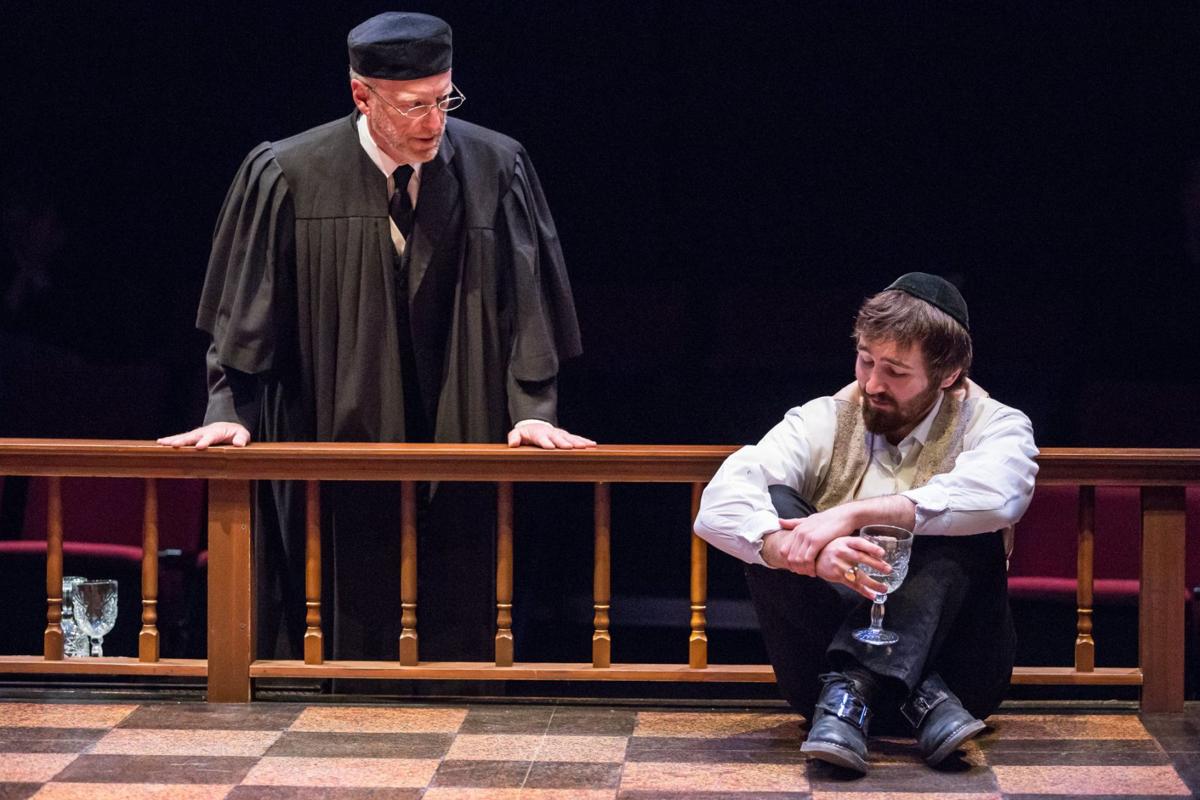 In the pensive and engrossing ‘New Jerusalem,’ conformity and a false sense of peace threaten genius

For the fourth production in its season, the New Jewish Theatre presents “New Jerusalem,” an intellectual courtroom drama focused on the nonconformity and brilliance of the young scholar Baruch de Spinoza. Surprisingly engaging and lively, the fact-based show is nonetheless filled with weighty subject matter as it illustrates how often the most learned among us are also the most fearful of new ideas.

The script’s full title “New Jerusalem, the Interrogation of Baruch de Spinoza at Talmud Torah Congregation: Amsterdam, July 27, 1656,” does a perfect job of setting the scene and story. The drama draws from the actual events that resulted in the excommunication, from his Jewish faith and community, of the scholar and philosopher Spinoza, who later developed the concept we recognize as separation of church and state. In contemporary America, his ideas have as much relevance today as when our founding fathers wrote them into this nation’s guiding principles.

Rob Riordan gives Spinoza a vibrant mind and soul, his words jumping from his mouth with infectious enthusiasm. He’s at times manic, but always thoughtful, well reasoned and, at his core, kind. Though driven by constant questions, there’s a gentle side to Spinoza that is often lost in the singularity of his thoughts and conclusions -- the madness of his genius, as they say. Riordan and director Tim Ocel find the sweet spot in the character, ensuring he is as captivating and sympathetic as he is intriguing.

Jim Butz is brusque, bold and duplicitous as Valkenburgh, the council member of Amsterdam working with John Flack’s Rabbi Mortera and Greg Johnston’s Ben Israel to tamper Spinoza’s spirit and silence his radical thoughts. Each man holds his own in the courtroom-style arguments that ensue; yet Spinoza challenges each man in ways that make them uncomfortable. Their interactions with Spinoza are the crux of this show’s tension.

Butz and Johnston bristle and attack ideas they cannot comprehend or will not entertain. Butz’s character also unintentionally reveals casual anti-Semitism as he ties his need to control Spinoza to the safety of the Jewish community in Amsterdam. Johnston’s elder is set in his ways; initially defending Spinoza his support withers at the slightest challenge. Both men are firm in their belief that anything that challenges their belief must be rejected. In contrast, Flack’s rabbi is profoundly moved and intellectually stunned by the young man’s impeccably reasoned reinterpretation of beliefs the rabbi holds sacred. Still his support of his star student is unwavering, even as he struggles to marry these new ideas with his more traditional understanding of scripture and its relationship to science.

Will Bonfiglio, as Simon de Vries, is sympathetically flawed. As a friend, he encourages Spinoza to find merriment in life even as he is secretly reporting the philosopher’s ideas to Valkenburgh. The character shows remarkable growth during his defense of Spinoza, and both Bonfiglio and Flack make it clear that de Vries and the rabbi are the two men most profoundly affected by the philosopher’s arguments. Each offers differing but equally affecting and genuine responses, emotionally expressing how shaken they are, yet within the decorum of the solemn proceedings.

There are also strong, intellectually capable women impacted by Spinoza. Karlie Pinder and Jennifer Theby-Quinn imbue these women with necessarily bold personalities, creating interesting and distinct characters integral to our understanding of the story. Pinder gives Spinoza’s love interest Clara van den Eden a brain and a backbone, and Theby-Quinn adds outspoken disdain and distrust to the same combination. Both understand and follow Spinoza’s logic with very different and somewhat surprising results. Historically speaking, it’s likely the women would not have been given the same opportunities to speak, either as invited or in outbursts, but each adds depth and texture, filling in detail and providing more personal perspectives to the laborious proceedings and grandstanding tendencies of the prosecutor and the orthodox leanings and theological approach of the rabbi.

The set, by Peter and Marjorie Spack artfully recreates the raised platform of the actual synagogue in Amsterdam, which continues to serve the country’s Jewish community today. The imposing and formal checkerboard platform features unobtrusive but well designed lighting by Jon Ontiveros and ambient sound. The costumes, by Michele Friedman Siler, are not period, per se, but successful. Most of the men wear quite modern suits underneath their clerical robes, with the women and de Vries more closely resembling the period, but they reference the style and feel of the time without distracting from the story.

Director Ocel and the cast work in unison to create a moving and effective show that allows history to reverberate with issues of contemporary concern. The idea of silencing brilliance, whether in philosophy, mathematics, science, art or any field, is seemingly in opposition to Western European thought and, particularly, the values we hold as part of our national identity. For a history piece that deals largely with the idea of intellectual property (though not called such in the period) and religion, the show is riveting and the characters remarkably interesting.

David Ives’ dense script will likely appeal most to individuals with an interest in history, philosophy and the evolution of religious thought, and it’s important to pay attention to every line delivered as they are packed with meaning and inference. But “New Jerusalem,” in performance through April 22 at the New Jewish Theatre, is a fascinating portrayal of a groundbreaking moment in history. The impact of Spinoza’s genius is still felt in our national conversation, and the captivating and sharply performed show contains enough story and dramatic tension to engage a broad audience.