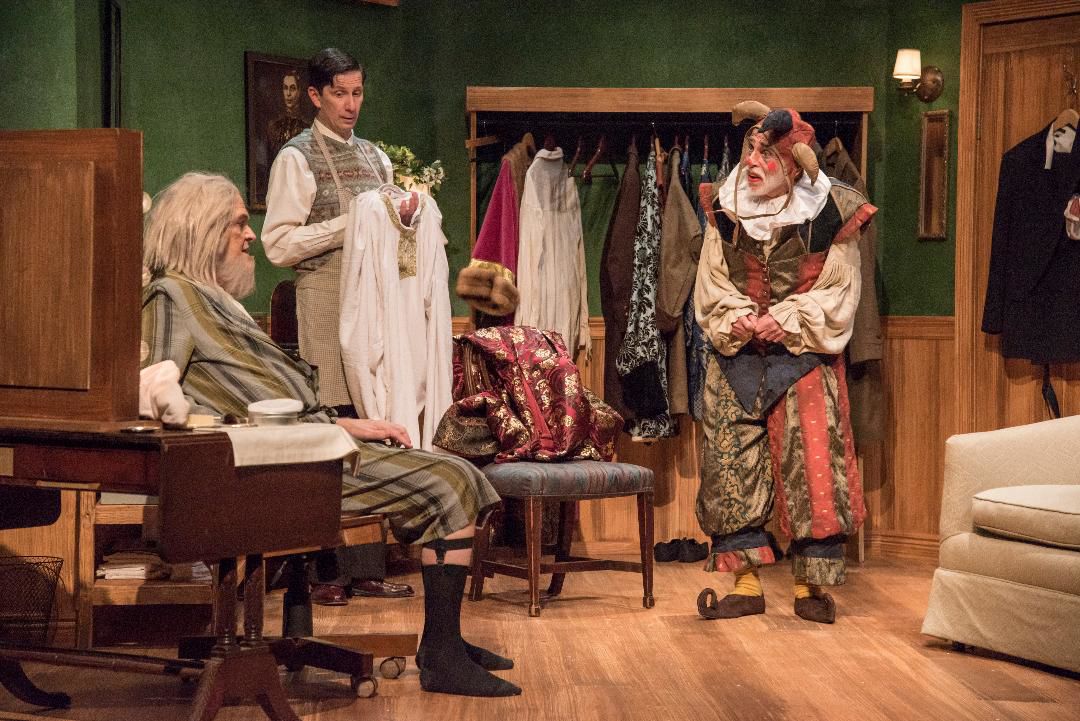 With a twist of perspective and just a few changes here and there, Ronald Harwood’s “The Dresser” could easily be a forgotten period comedy about an aging and understaffed Shakespeare troupe doing their best to persevere in the British tradition during the height of World War II. In the hands of the playwright, director Bobby Miller and actors David Wassilak and John Contini, we get something much different and distinctly more memorable.

Deeply satisfying on multiple emotional levels, “The Dresser” waxes contemplative on art during war, presenting characters who are not always sympathetic and occasionally uncomfortably inappropriate. The lead actor’s health is failing in part from the stress of continuing to perform, night after night -- air raid sirens and low rations be damned. Still, the show pulls at mostly positive emotions and elicits a fair amount of laughter as it raises questions of self-worth, the expression and excesses of artists, and the realities of age and death.

Wassilak turns in a masterful, and fiercely loyal and touching, portrayal of Norman, the dresser to the star and manager of the troupe simply referred to as Sir. His is a life of service and memories, of always being the understudy and never in the spotlight. He guards Sir closely, controlling his access and nursing him from one performance to the next with an assortment of well-tried tricks and a persistent push. Wassilak’s nuanced interpretation is tightly wound and finely tuned. With nervous fidgeting and a particular air he plays the part like a virtuoso, turning in one of his best performances.

John Contini, as the exhausted actor and bon vivant Sir, complements Wassilak's Norman with perfect aplomb, waving his arms about dramatically but with the weight of his world visibly sloping his shoulders. He can barely manifest the energy to breathe, but when the stage lights come up, he somehow manages to transform. Using a deft and at times imperceptible touch, Contini lets us see every aspect of the aging actor: the glorious, the ugly and the untoward. Though the audience only sees his preshow jitters and post-show glow, the love of theater visibly energizes Contini's character, he straightens his bearing and his presence lights up.

Emily Baker, Missy Heinemann and Bridgette Bassa shine in different ways as the women in Norman and Sir’s life and the ensemble have several humorous moments. Baker is crisp and clear, with the confident movements of a clock and a shy smile and knowing glance that add tenderness to the business-like stage manager. Heinemann is a bit flighty but genuinely anxious over Sir’s health and the future of the company. Ambivalent at times, she’s not a pushover. Bassa handles the role of the young, accosted and accused ingénue with blushingly varied emotion and her impassioned monologue about theater is a joy to watch. Chuck Brinkley and Richard Lewis are humorous in small roles, with Brinkley’s gruff actor resembling a young and British Teddy Roosevelt. Anthony Heinemann and Jeremy Goldmeier capably round out the cast.

Director Miller keeps the show moving at an almost hypnotic pace around Patrick Huber’s appropriately cramped backstage and dressing room design. The sense of character is heightened by each actor’s attention to the little details, a touch of connection that’s also reflected in Teresa Doggett’s appropriately worn but still theatrical costumes. The story unfolds at a carefully measured pace, years of repetition creating an almost precise routine and a self-defined rhythm that’s calm on the surface while allowing us to see the frantic movements that keep the troupe afloat.

No one wants to talk about aging or to imagine what to do when they can no longer continue pursuing their passions. Wassilak gives Norman the voice to speak to our fears. Often fretting and always protective, he comforts the audience nearly as much as he reassures the ensemble around him. Despite, or perhaps because of, their flaws and failings, the ensemble delivers a tale of death that resonates with warmth and humanity. Lovely and bittersweet, “The Dresser” continues at St. Louis Actors’ Studio through April 29.