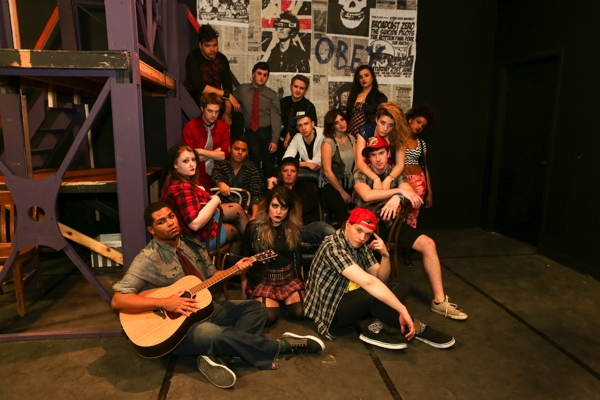 Entertaining and effective, ‘American Idiot’ is a sensory onslaught that flashes with brilliance

The music of Green Day reverberates with the energy, angst, and raw emotion of a generation struggling to find its place and facing economic decline and an uncertain political landscape. The songs reflect the mood and temperament of a disillusioned, disenfranchised generation Frontman Billie Joe Armstrong and Michael Mayer tap into those sensibilities for the book to "American Idiot," a rock musical that unapologetically fills the spaces between the band's songs with a captivating reinterpretation of the American Dream.

Johnny, Will, and Tunny are best friends, living aimless suburban lives and looking for purpose, or at least something -- anything -- to spur them to decision and action. In an attempt to break out of their malaise, Johnny gets the three bus tickets to the city. But Will has to face reluctant fatherhood and Tunny turns to military service, leaving Johnny to his own devices. That much of the story is familiar, repeated across generations -- but this time without the optimism or hope their parents and grandparents expressed.

None of the paths are easy, and there is no clear reward, only momentary escape through drugs or drink. Instead of white picket fences, they have shopping malls and sprawling pavement. Instead of a future filled with promise, they face uncertainty and financial insecurity. This is post-nine-eleven America, an age of diminishing jobs, instant gratification, and suicide bombers, and a time filled with doubt.

New Line Theatre mines these themes in a deeply satisfying production of "American Idiot" that features an abundance of young talent. Evan Fornachon anchors the talented cast as Johnny, his voice is strong and clear and his motivations authentic, if at times without defined purpose. Fornachon expresses much through movement and physicality, but he also captures the emotional turmoil with every change of tone, letting us inside his character. He and his friends are lost and stumbling as they search for a way forward. Fornachon is by turns angry and impatient, bewildered and confused, but with an underlying likability that earns sympathy even though he isn't always deserving.

Brendan Ochs and Larissa White are heartbreaking as young parents Will and Heather, effectively connecting with each other and with the darker aspects of character. Both actors show good command of their characters, finding depth and authentic emotion in even the briefest exchanges. I only wish Ochs didn't wear the ball cap the entire show as it hid his face; his character's despair was clear through his body, but I wanted to see more.

Frederick Rice is sympathetic as Tunny, and there's a fragility to his character that was quite unexpected. Chris Kernan slithers and entices as St. Jimmy, then surprises with a display of genuine longing that is deliciously ambiguous in its focus. As Whatshername, Sarah Porter once again demonstrates her chameleon-like ability to inhabit a character, and Sicily Mathenia captures the very essence of Extraordinary Girl, while the entire ensemble brings a gritty, impatient energy that gives the show an unwavering pulse.

Directors Scott Miller and Mike Dowdy clearly express the tone and atmosphere while demonstrating a perspective well aware of the socio-political context of the show. They utilize the spaces well, with visual and video references and a barely there set, designed by Robert Lippert, keeping the action moving and the tension building. The directors, along with conductor Sue Golford and an exceptional band, also create effective, interesting soundscapes. Exits and entrances from the crowded audience as well as the clever positioning of some singers lying on the floor added significantly to the sense of immersion, though there were time I strained to see if I was missing some of the action.

There are some tough sight lines, however, and it's difficult for much of the audience to see Ochs on the couch in front of the band, a fact emphasized by the previously mentioned ball cap. Costume designer Sarah Porter effectively harnesses the look and feel of the early 21st century punk, particularly the women's and St. Jimmy's costumes, and the aforementioned cap is the only real misstep. The choreography fits the pace and mood of the show nicely, but doesn't take chances. As with the entire show, it is effective but a little too polished.

There's a sense of the existential, a hint of the depravity of addiction, that works well in the production but lacks the edgy, risk-taking appeal of the band's music. Some of the characters could be even darker. For example, St. Jimmy is genuinely creepy, but might be more powerful if pushed to corpulently sleazy. I encourage the actors to keep digging into the darker corners of their roles as the show continues, they've expertly captured the raw authenticity, but the show feels a little safe and comfortable.

Overall, New Line Theatre's "American Idiot," running through March 26th, is a fantastic production, and several scenes flash with brilliance. The cast are uniformly strong singers and the interpretations of the songs are spot on. Familiar hits, like the title number, "On Holiday," and "Know Your Enemy," are engaging and powerful. "Wake Me Up When September Ends," brought me to tears, and lesser-known gems, including "Give Me Novacaine" and "Whatshername" shine with unexpected relevance. The themes resonate with contemporary audiences, and the talented cast invites them along for a nihilistic-tinged roller-coaster ride that entertains at every turn, making "American Idiot" a show not to be missed.