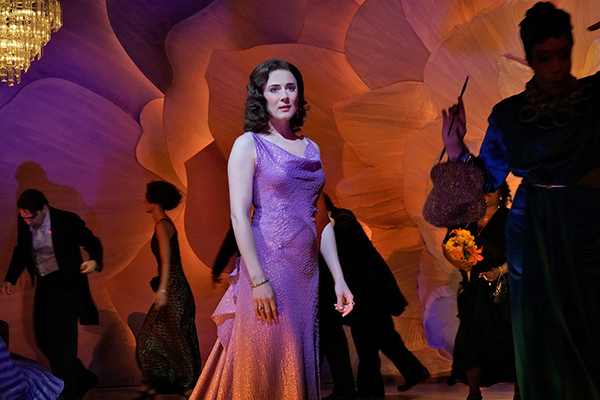 Now in its 43rd season, this company has grown into one of truly international renown. Opera-lovers from all over the world fly to St. Louis to participate in its yearly festival of opera that blesses our town each May and June; they know that they will be seeing the very highest level of that art.

Opera Theatre St. Louis offers four main-stage productions each year. There are beloved standards, lesser-known works, and – in their "New Works, Bold Voices" series – brand new operas. They have produced 28 world premieres! When you want to find out where opera is going in America, look to St. Louis.

Before the performance, patrons enjoy picnics on the beautiful grounds that front the theater. Bring your own or partake in the gourmet catering. (Saturday's opening night suffered a few sprinkles of rain.)

You know the story of "La traviata." It's taken from Dumas' "La dame aux camellias." Violetta, a beautiful Parisian courtesan, leaves her life of wanton splendor to share true love with Alfredo. Complications arise, not least her imminent death from consumption.

Scene designer Laura Jellinek places the story in the bosom of gigantic camellia blossoms. They surround the stage and under the gorgeous lighting of Christopher Akerlind, they take on all the hues and shadows of gaiety and love and sorrow and loneliness and mourning – écru to orchid to rose to a deep blue-violet to passionate red to an ashen chilly ice. It's amazing work.

Within this beautiful frame we are treated to some astonishing voices. Sydney Mancasola brings to the role of Violetta not only a stellar voice, but also the stunning beauty that Violetta should have. She deftly manages the coloratura vocal acrobatics that the role demands. She shines like a silver thread above the chorus. And how can that slender body contain the power she brings to those perfect high-notes?

Alfredo is sung by Geoffrey Agpalo, a wonderfully gifted tenor. Such smooth power, such clarity! His is a voice that seems perfect for this space. His diction is so crystalline that one never needs the supertitles when he is singing. He quite stole the show for me. I think a tenor has an intrinsic advantage over a soprano when it comes to understandability; but I also think Mancasola might profit from a touch more emphasis on consonants.

Clouds darken the idyllic country life of Alfredo and Violetta. She has been secretly selling her jewels to bolster their finances; her illness progresses. And suddenly Alfredo's father, M. Germont, appears. He begs, he demands that Violetta leave Alfredo so that their illicit affair will not ruin the marriage chances of Alfredo's sister.

Joo Won Kang plays Germont, singing with a very lovely baritone. His voice is a gentle shade darker than Agpalo's. Kang's diction is also excellent. As an actor he masters the conflicts and compassion of the character.

The gorgeous trio of Violetta, Alfredo and Germont which leads to her transcendent death is, by itself, worth the price of admission.

Conductor Christopher Allen does brilliant work, especially in his subtle control of dynamics—from the first soft strains of the overture, like a gentle breath of strings, to the poignant reprise of that melody in the final moments. The rather large orchestra beautifully supports, never dominates the voices.

Patricia Racette reaches beyond her career as a fine soprano to make her debut as stage director of this production. She handles her large cast with a deft hand.

It was an excellent, but not a perfect production. I'm not sure what point is made by transposing the era from the mid 1800s to the 1930s. Present on the stage are a viscomte, a baron, a marquis – not to mention a "courtesan." Such titles (and labels) seem rather out of place in the 1930s, as does the high scandal surrounding Alfredo's illicit liaison. Costumer Kay Voyce does generally fine work within the limitations of that era. The opening formal gala is elegance indeed – men in tail-coats, women in flowing gowns – all in black and white, with a touch of dark silver. To this, Voyce adds one graceful note: Violetta stands out (as she should) in a gown the color of an orchid. Voyce also adds one very discordant note: Flora stands vividly out (as she should not) in a gown of intense Kelly green! (Huh?)

A minor quibble about the set: For the country house in Act 2 we see, in front of the lush camellia background, two vertical panels showing bushes filled with camellia blossoms. These panels are so glaringly rectangular as to be dissonant with the great curves and complex layering of the flowers of the background.

A nit or two to pick with director Racette:  Use of the revolve in the party scenes adds to the sense of gala swirl, but the turntable is used several other times – for no other purpose than to say "Look, we have a turntable!" (It is so extraneous to Violetta's death scene!)

The crowd scenes (with a chorus of some two dozen) too often seem just a stage full of people. Some judicious sub-groupings would give a more natural look. And why, in the masquerade party, as Violetta lies shamed and weeping on the floor, is the chorus so static?

They sing their compassion for her:

"Ah, how you suffer! But take heart,
here, each of us suffers for your sorrow;
you are here among dear friends;
dry the tears which bathe your face."

And yet they maintain their distance from her. Not a one ventures to act out that compassion, to approach, to kneel by her, to touch her hand. This is sympathy?

But all these are quibbles. All in all, it is another great success for Opera Theatre of St. Louis. "La Traviata" continues through June 23rd.